Among the St Nicholas stuff (which is also too early in my book, now that commerce has taken to promoting Halloween as a shopping occasion they can wait until the first of November with St Nicholas, right?)  there was a bag containing, clearly, 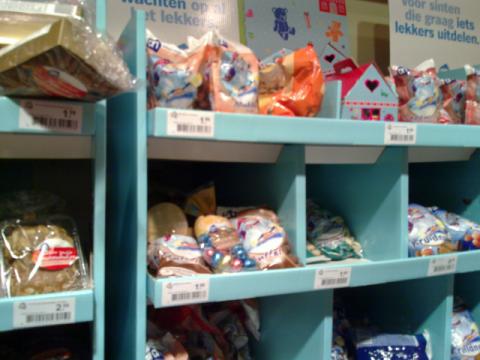 chocolate Easter eggs. Not labeled, except “Mixed plain/milk/white”, but they’re not labeled “Easter” at the right time of year either.

I didn’t think of alerting staff to it, and if I had it would probably have been like the time when I asked about In the Bleak Midwinter being played in March, they’d have mistaken curiosity for complaint.

My inner curmudgeon suggests that the supermarkets really don’t know what feasts mean any more, but my inner realist supposes it’s a simple mistake in the warehouse and the shelf-stocker thought (s)he’d just put it somewhere rather than make a fuss.