Or craft, whatever. I’m taking part in a series of three workgroup sessions about gratitude, organised by the local Protestant church where I know some people. I think I and a Bahá’i woman were the only non-Protestant participants. We had a round of introductions (ick), then someone told a very condensed version of the story of Ruth in the crypt, using wooden figurines and a blue braided cord for the River Jordan. At one point, when most of the wooden people were standing on the Bethlehem side (Naomi, Ruth, Boaz, Obed –whose name never got mentioned for some reason–, Jesse and David, also David’s gold paper crown, so large that it was almost a character in its own right) and wooden Orpah by herself on the Moab side, I said “poor Orpah, all alone over there!” so the storyteller gave her a wooden family.

After the story, we got to choose craft materials from a large selection to “work on the story”. It’s not something I’m used to doing, and I was a bit apprehensive before I started, but the storyteller’s River Jordan as connection/barrier had inspired me and I made this: 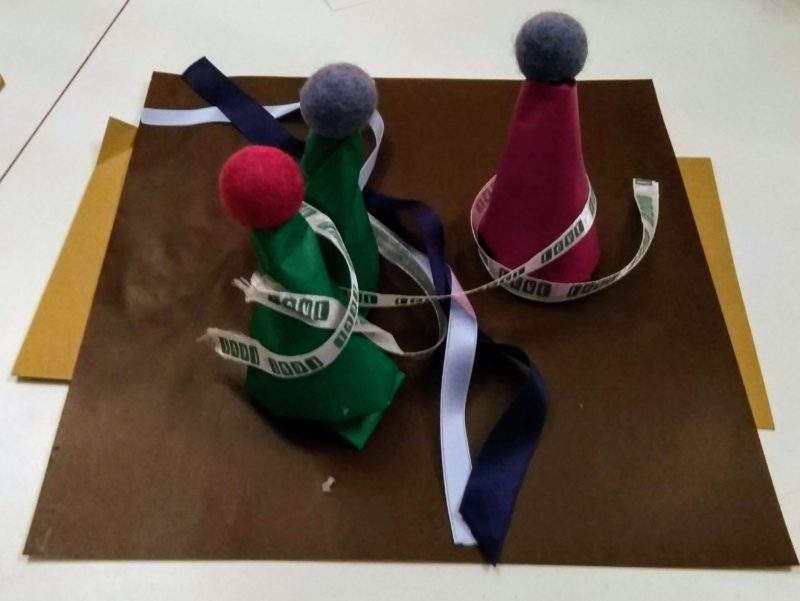 Ruth and Orpah have the same skin colour; Ruth and Naomi have the same dress. Ruth and Naomi are standing on one side of the blue ribbon river, Orpah on the other. I wanted to show the connections between them and went back to the materials table for a ball of yarn or something, and then I found two ribbons with “LOVE LOVE LOVE” in the ribbon box (I squealed with joy when I did, and someone asked “did you find what you were looking for?” and I said “no, I found what I needed!”) so I could wrap one around Ruth and Naomi, and the other around Orpah and push it between the other two. Orpah’s ribbon is also stuck to the land.

This was half an hour’s work, and it doesn’t stick together properly so I had to repair it all the time at the show-and-tell, but we’ll have some more time with it next session before we go on to philosophical and theological questions. I’m all in favour of philosophy and theology, but the craft is so much fun!