Some time in the last year I found a little end-of-year roundup questionnaire, saved it, and forgot to note down where I found it. Grr. If anyone knows, please tell me, because I want to give due credit. I think it was specifically for writers (or artists?) but I’ll expand it to cover different parts of life. Also, I’ll answer the questions as “name one or a few things” rather than “list all the things”, because even if I’d kept a detailed journal it would probably be very boring.

What did you start?

Learning Italian with Duolingo. If I’d had a smartphone months, not days, before I went to A Coruña I might have used it for Spanish. I didn’t think anything so gamified would work for me, but it does. Almost painlessly, too: I don’t notice I’m learning anything I didn’t know yet, but it turns out that I do know a lot more than when I started! It says I’m 34% fluent, and I’ve taken to thinking about it in terms of skill points in our homebrew role-playing system, 10% for one point, where 3 points (about my current level of fluency, in other words) means “can get by with some difficulty” and 7 points (70%, which seems to be the maximum that Duolingo can cause) is competent enough to specialise. In fact I’m already somewhat specialised in Italian; if a text is from about 1600 and about dancing I can read and use it without any trouble.

Duolingo doesn’t offer Finnish, worse luck, so I can’t use it to prepare for Worldcon in 2017, but when I’m done with Italian I plan to do either Russian or Turkish, the former probably more immediately useful, the latter more intriguing.

What did you finish?

I’m so tempted to say “nothing”, because I didn’t finish a single piece of writing that I’ve been working on this year, not even the one that I sort of promised someone to finish. Somehow I don’t feel that loaves of bread or other cooking count, or NetHack ascensions, or books read, even if I wrote a blog post about it. Perhaps I’ll think of something yet, but 2015 seems to have been a starting-things year, not a finishing-things year.

What did you have to leave unfinished?

Most recent and most notable thing: the Kickstarter rewards,  because the people I commissioned in October to make them delivered part of the job just before Christmas, and some of the missing stuff needs to be in every package so I can’t do anything right now. This frustrates me no end, but if I make one New Year’s resolution this year it is not to fret about things I have no power over. I don’t want to use a less local, more commercially savvy and larger-scale print shop, because these people do a very good job and listen to us when we want something non-standard and they deserve the work. Only they didn’t realise, so didn’t warn us, that the job was larger than they could handle.

What did you abandon?

The illusion that I’ll get the new server set up on the netbook. I tried twice and hit the same insurmountable problem. Perhaps it can be done, but I concede that I can’t do it.

What did you do for the first time?

Give a presentation at Akademy. I was scared out of my wits. I haven’t dared watch the video yet but when I offered to give another presentation at the next Akademy that wasn’t booed down, so I may have done all right. (And thank you, person who is even more scared than I am, you know who you are, who supported me all the way and gave me a physical token of confidence.)

What did you do for the last time, as far as you know?

There’s nothing I can think of, though I must have said “I’ll never do that again” at some time, perhaps several times. I can’t even say “try to set up the expletive-deleted server” because the last time I did that was in 2013. Well, go to the zoo in Emmen in its old spot right in the town centre, because it’s been moved out of the town centre to a larger terrain.

What did you do that you’ll definitely do again?

Make long journeys on international trains. (In fact the tickets for Italy have already been ordered.) And go to the train-travel agency to sort it out, because while I can do it myself and actually enjoy it, there’s something to be said for having someone with all the resources do in two hours what I’d need several days for.

What did you get wrong?

I should have trusted my judgement and put the hares for Boxing Day in the freezer until Christmas Eve instead of keeping them in the fridge for eight days, as the poulterer assured me would be all right. One, or perhaps both, of the airtight packages turned out not to be completely airtight and the fridge smelt a little ripe in the course of that week. When it came to cooking, my other half cut off all the bits he didn’t trust and washed the pieces very carefully and it still smelt more than a little ripe. It was a blessing that we were making jugged hare, not lièvre à la royale with lots of spices, because when I came back from seeing Star Wars with Secunda the smell in the kitchen was definitely off, and my other half and his father agreed. We abandoned the hare and had chicken instead — fortunately the supermarket was open or we’d have had to go out for dinner after all.

What did you get absolutely right?

Projecting a Nativity icon on the wall of the underpass near the church for Fr T to explain to the children’s candlelight parade. 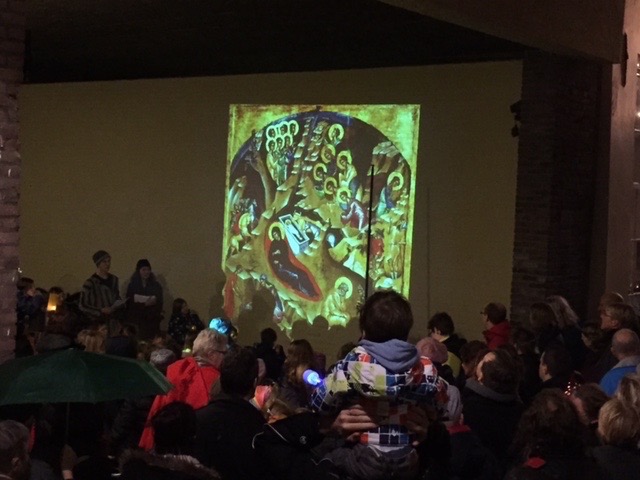