It’s roof terrace time! In open defiance of gender roles, my other half messed about with plants while I hacked the furniture with power tools. Well, only one power tool, because the battery for the electric screwdriver was still charging and I could manage with some elbow grease. 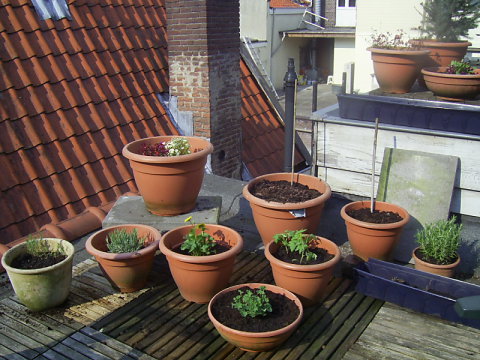 They’re all very new, of course, straight from the market, but we expect them to grow and fill their pots. 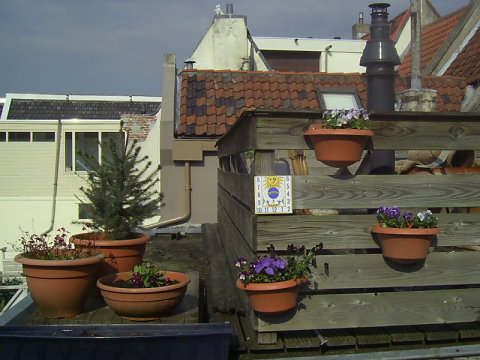 The pansies hang from the neighbours’ terrace railing. They (the neighbours) probably won’t mind, because the last time they used the terrace at all was New Year 2009/2010 and some of the rubbish is still there. Our ex-Christmas tree wanted to keep growing, so we put it somewhere it could indulge. 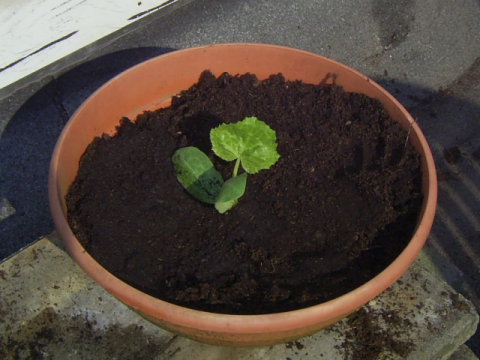 This is going to bear zucchini (or vegetable marrows, if we let them) when it grows up. Last time we had one it wouldn’t stop bearing zucchini until it was really autumn and it didn’t get enough warmth any more.

A few years ago we bought a large cheap wooden swing, and it was showing signs of age: the backrest wouldn’t stay in place but leant further back every time someone rested their back against it. I thought to fix it with a bit of wood on the diagonal, but as I was walking the 15 meters to the hardware store I realised that a chain would probably be sturdier and need no protection against weather. Hardware Man said “I tend to think in wood but I think I agree with you” and sold me two 60 cm lengths of “Victor chain” and a couple of washers (that I turned out not to need, the bolts and nuts were big enough not to go through the links) for the princely sum of three euros. 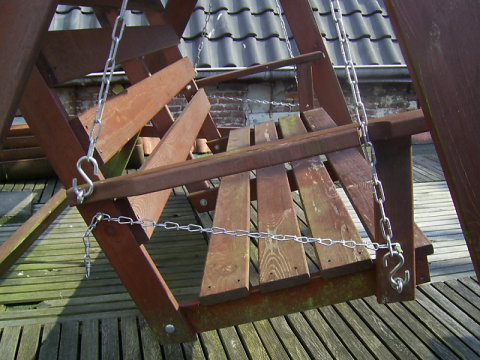 I may cut off the excess length with combination pliers at some point. When I measured, it was for wood to reach the sides of the existing frame.

Next up: buy some wood stain and repaint the wood, because that’s showing signs of age too.