This morning I was about to take my bike off the chain-lock to go swimming when I saw something strange. I should of course have taken a photo of it, but one always forgets in a situation like that.

There was a ring-lock, the kind that’s usually firmly attached to a bike, locking the front wheels of Secunda’s and Tertia’s bikes together. It was an Axa Defender, and I happen to know that that’s too tough to saw through with my little handsaw. So I went back inside and told the girls to use my bike and Prima’s, and I’d try to solve it.

Now if I’d started walking to the pool at once I’d have had about forty minutes to swim, but of course I didn’t think of that until it was so late that there was no point in going. The pool is open all of Wednesday morning, but from 9 to 12 it’s only the indoor pool.

I went to the friendly hardware store later in the morning and explained the problem. “You won’t get through that with a metal saw,” the shopkeeper said, “you’ll need an angle grinder.” “I don’t have one,” I said. “Oh, but we do!” and he promptly lent me one, as well as a pair of safety glasses. “Er… I’ve never done that before.” So he also lent me his assistant, who disdained the safety glasses and ground through the lock very carefully, cursing a little when he almost hit the tire. I’m so glad I didn’t have to do it! 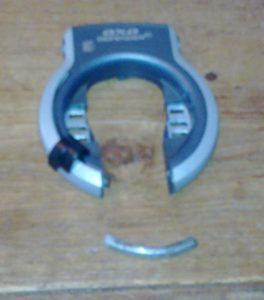 One question: Why? I know of the ploy to lock an already locked bike with a chain lock in hopes that the owner will unlock it, notice that it’s chained to something, and go away to get tools without locking it again. But two together, which were not only locked, but chained to the broken bike we keep especially for that? If they were going to come back with a van, they would have had to move the whole bunch anyway: Secunda’s, Tertia’s, the anchor bike, the black one chained to that with another chain (my spare bike, which needs some repair) and possibly mine as well; they couldn’t know I was going to take it away.

And anyway, one of those locks costs more than they’d have been likely to get for the two bikes they locked together with it. I’ve just made a thief pay about 30 euros for nothing.