By making me show up at a doctor’s office wearing only a (shortish) T-shirt. It was probably some kind of specialist or therapist, because I’d had to go all the way to Maastricht for it. (We currently have a house-guest who lives in Maastricht, so the exact choice of place may be from that.) I could retrace the steps that had made me leave the house in my bare bottom, but that didn’t help much, nor did it explain why I didn’t notice until I was in the waiting room – it would have taken me two and a half hours by train to get to Maastricht, let alone the walk from the station to the practitioner. I went back to the station and found a vast expanse of building sand in front of it, with only a narrow walkway to get to the entrance (which is quite a normal situation for stations in the Netherlands). Once there, I was with friends/acquaintances who apparently lived or at least stayed at the station. When I said “I’ll have to go to the Hema to buy some pants” one of them said “Oh, I’ll open it up for you” because he happened to be the manager of the in-station Hema store. (There are indeed Hema stores at some large stations, and this station actually has one, I looked it up.)

It was a large Hema store for a station, but they had only one pair of pants even approaching my size, in shiny grey nylon. But that didn’t matter, because I was fully dressed again, and could even feel my ordinary cotton Hema pants under my skirt. I browsed the store a bit more and found very pretty masks, some with poetry on them, but they all badly needed washing so I didn’t buy one.

I must have stayed with my friends for lunch, though I did go into town later (with some language confusion of “into town” versus “into the town centre”). We had an impromptu sing-along of folk(ish) songs that the store manager’s mother, who was one of the people present, was going to sing at a concert. I contributed the refrain of “The Housewife’s Lament” translated into Dutch, because she had translated all the verses but couldn’t get a grip on the refrain. The refrain is actually the only part of the song that I have translated (in waking life) and when I sang it she loved it. Also another Peggy Seeger song in Dutch translation, and something in Finnish that was easy to sing along with, and something medieval.

Also, the green bag was there that I used to have in waking life, and loved, and wore out completely, and had to throw away, so I folded the dream-bag up and put it in the bag I was carrying, vice versa would have been awkward because the green bag was much smaller. 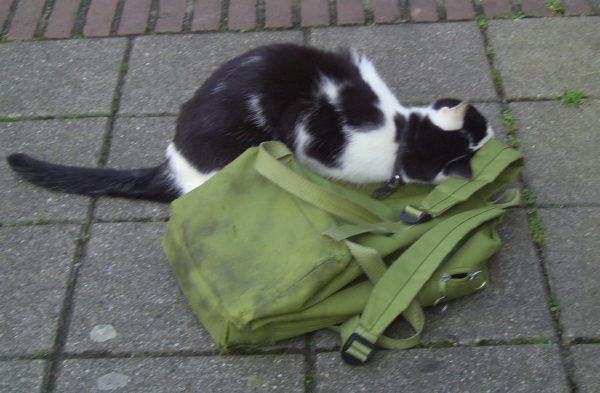 That bag. Cat not included.