Like the previous time when we ended up in a zoo our original idea was to go to a museum. That we didn’t do it this time was because it was Kingsday, but Blijdorp was open all right. It seems to be a very bad thing these days to like, fail to disapprove of, or even merely visit zoos, but we’re not deterred (though I have a strange feeling of guilt that I’m not feeling guilty. Or something.).

Blijdorp, like Emmen, tries to give the animals a place that suits them, which meant that many of them were not in sight because they had a nice secluded place to sleep and were actually sleeping. Though we did see a tiger half-asleep behind a little hill in its enclosure, probably thinking it was invisible. 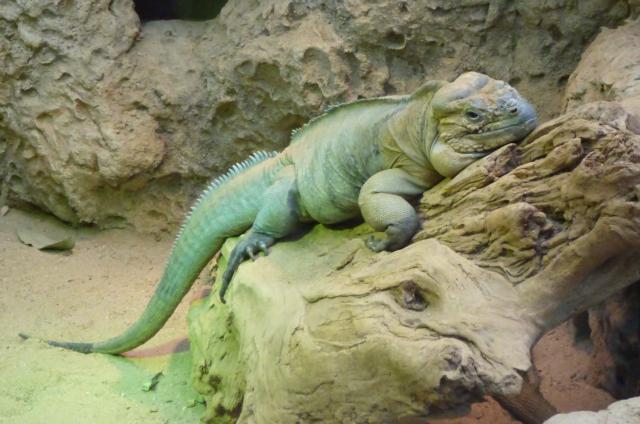 I don’t know what kind, because I forgot to write it down, but it’s an awesome lizard, about the size of my forearm, lounging in a huge terrarium in a corner of the Oceanium (where I could have indulged my vague feeling of guilt by visiting the global-warming display, but it was avoidable and I avoided it because I hadn’t come to be preached at about things I have very little power over).

We had lunch on a bench near the elephants –it’s becoming tradition– and stayed quite some time to see the little girl elephant gambol, and her aunt and adolescent cousin drink water and kick the little one away when she tried to reach the water as well, whether to protect her or from sheer meanness I don’t know. (But I’ve seen so many clips of baby elephants rescued from pools that I think the former.) Later, two elephants were actually in the water, but they still sent the toddler away to her mother. Strangely, there wasn’t a single male elephant, and Emmen only has one adult bull and a couple of juvenile males. I wonder whether there’s a huge surplus of bull elephants somewhere, or they’re quietly killed off, or there’s just a great discrepancy in male and female elephant births. Some day I must research what it’s like in nature, in any species that has herds of mostly females– do males fight and kill each other once they reach adolescence? Do they roam in groups or singly (I know lions do)?

I didn’t take pictures of elephants, not even in the water, because we didn’t realise the camera existed (and we actually had it with us) until we got to the bird show. The bird show is called “Free Flight” and it’s indeed that: they don’t restrain the birds or make them perform tricks, but train them to know where the food is and how to get it from the humans in the way that’s most natural to them. Hornbills, ibises, a barn owl, a very elegant little blue insect-eater, all soaring over the audience’s heads, but the most exciting thing was the vultures. I never realised that vultures could actually be cute. 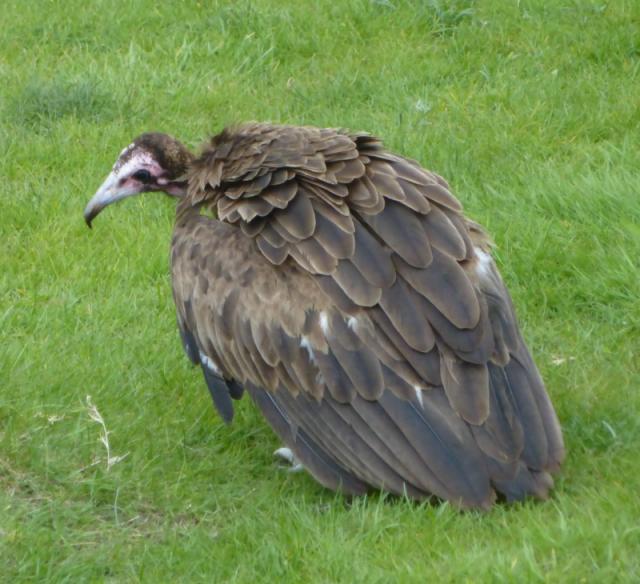 This one was younger than the rest, new to the show, and the woman running the show said that they let her have a head start so she’d attract the others, “hey! she’s got something, let’s go and see!” And indeed, as soon as the little one started on the sheep’s head all the other vultures came down and joined the feast. 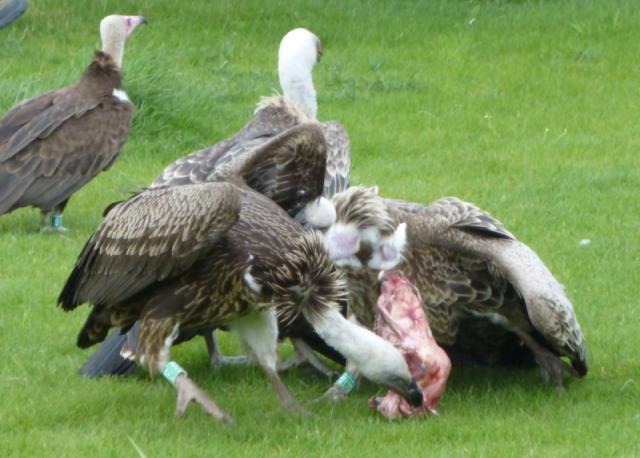 While they were at it the presenter told us a lot of interesting facts about vultures, which will drift to the surface of my brain when I need them for something. In about ten minutes the sheep’s head had been picked clean. 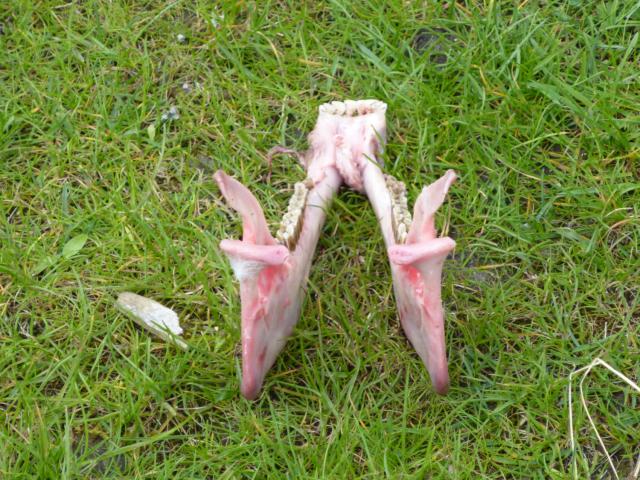 Though the youngster could still tear a piece of meat from it. Hooded vultures are smaller and have extra-pointy beaks to get at the very last meat on the bones. 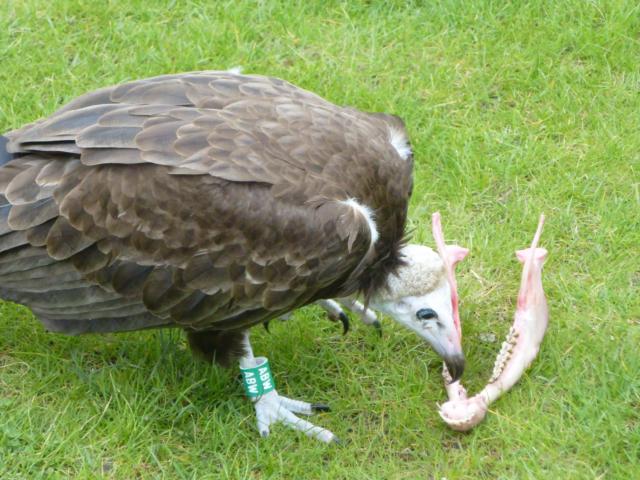 Later, we saw other vultures (in the vulture house, where humans could enter through birdproof doors) demolishing a horse’s head the same way. Slaughterhouses must like Blijdorp a lot as a customer. 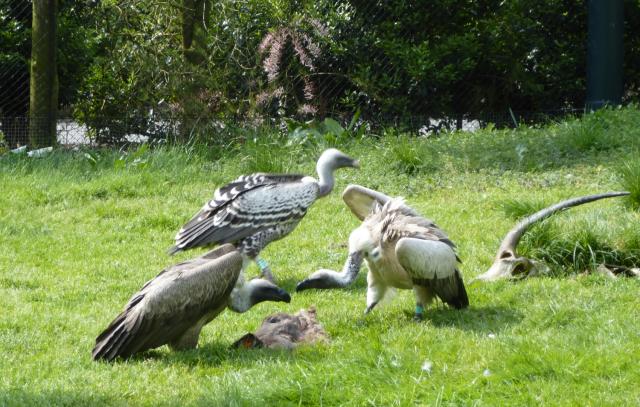 We’d missed the lion feeding time, but we didn’t mind — we know lions eat Huge Chunks of Meat, but we’d never seen vultures eating a sheep’s head. We did see a fishing cat with a couple of fishing kittens, eating a rabbit; astonishingly beautiful cattle (I did take some pictures but they don’t do justice to them), several sorts of deer which made us fall into roleplaying-campaign mode (“ooh! looks tasty!”), hyraxes with lots and lots of young, and prairie dogs in a pen with a hole in the middle that small enough people could crawl into and put their head through. When a little girl did that she was suddenly eye to eye with a prairie dog, and human and animal went “Eek!” in unison.

And camels. Two camel calves, one light and one dark, with different mothers but the same father. 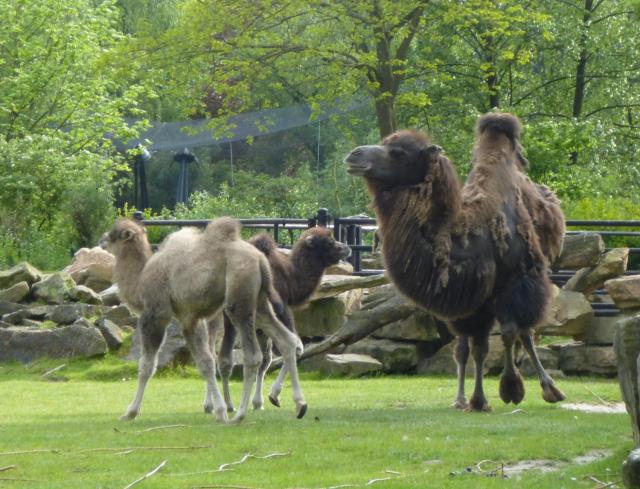 They were both trying to get at the dark one’s mother’s udders, and after she’d kicked the light one away several times (do I see a theme here, kicking the young?) … 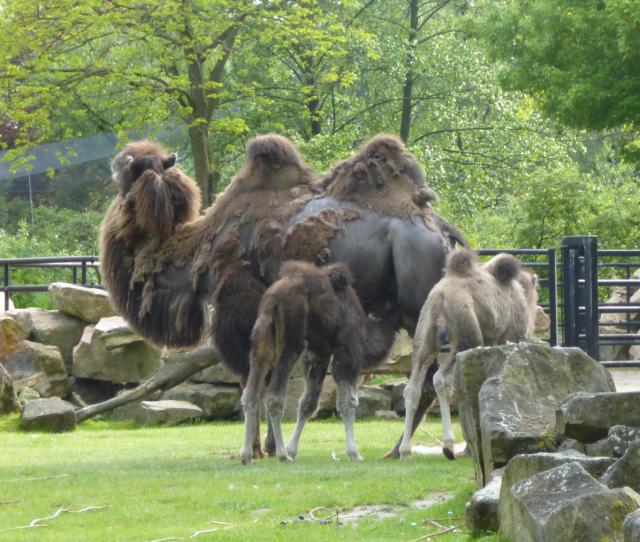 they actually succeeded (count the legs!) 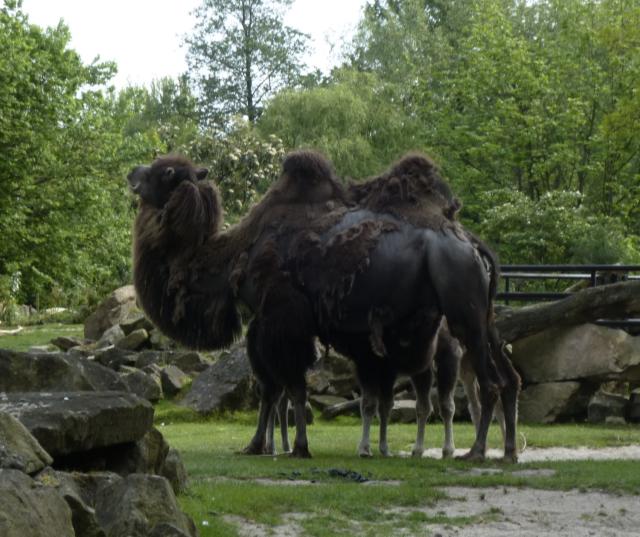 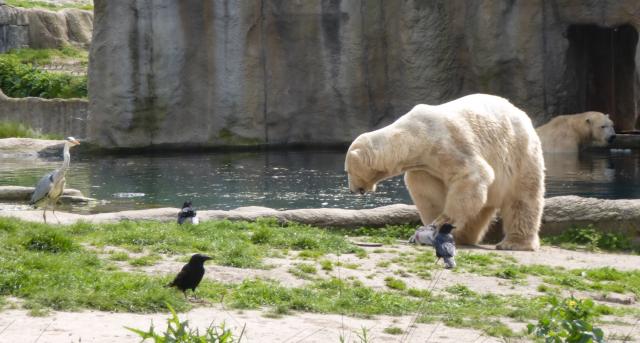 One bear in the water, one on the land. They each got a bucket of fish frozen in water, making people standing next to us exclaim “they don’t eat frozen fish in nature, do they?” But they seemed to enjoy it immensely. The one on the land had a large audience of birds hoping for a fish!