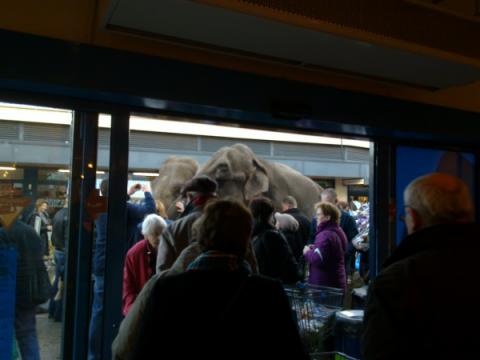 This. No wonder it seemed too crowded to get out with my cart. I did eventually succeed in maneuvering the cart between the parked bicycles so I could go and pet an elephant on the trunk, which I’ve wanted to do forever. It feels like very hard leather, and I don’t know if the elephant actually felt it but she seemed to like the attention.

It was Circus Renz Berlin, which is giving shows in our town. I’m not going — much as I like elephants, I don’t much care for elephant shows, I’m not interested in acrobats and, most of all, I’m terrified of clowns. The local Party for the Animals is campaigning for a boycott on the grounds that having any animals in a circus is animal abuse (they use the word “torture”) but these elephants didn’t look abused or tortured or even unhappy to me, they were calm and friendly and interested in everything, very elephant-like. 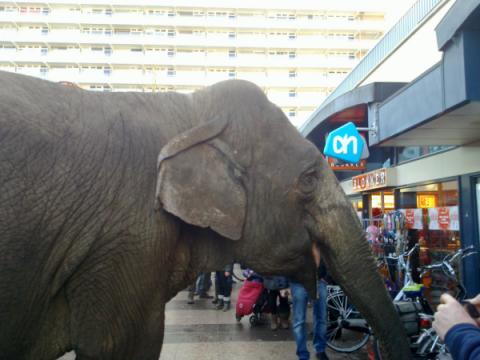 This one was investigating the bicycles. Later, she pushed an advertising board at least five meters, probably just to see if it would move if she did that.