I wore my finery.

I seem to look sort of unhappy, but that’s probably because I was having my picture taken. 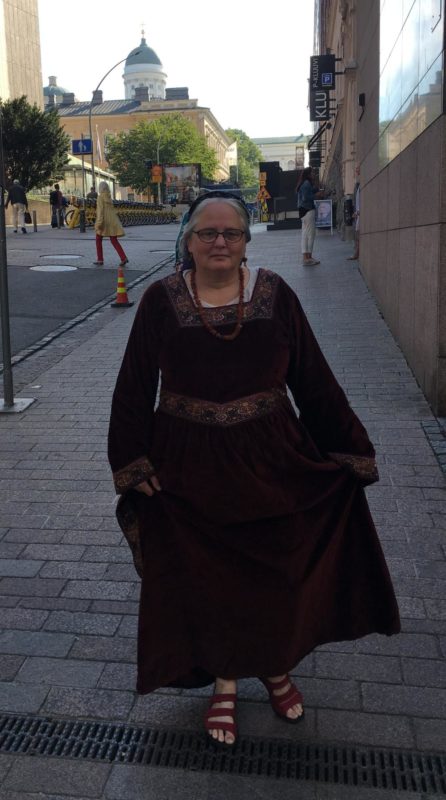 Several people at the con wanted to take pictures of me and/or complimented me on my “costume” — but I don’t think of it as costume, it’s just a higher tier of clothes than my normal clothes! I came up with a division into ‘clothes’, ‘dressing up’ and ‘costume’, and this is definitely ‘dressing up’. ‘Costume’ would be getting all the period or otherwise canonical details right instead of wearing Ecco sandals because I wanted one part of my body to be cool (as in: low temperature). Which turned out to be useful, because the weather was really warm and the confounded thing is made of velvet and weighs about five pounds. I was wearing a muslin shirt under it, which looked great, felt great and is now probably permanently stained red so I’ll keep it as the undershirt for this dress. 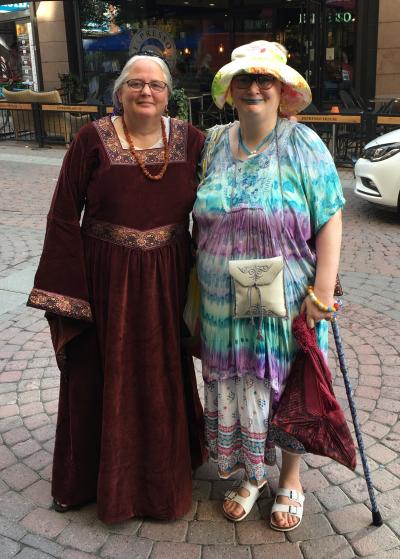 I’d had only a cup of tea and a cracker for breakfast because I was meeting my friend Julia for hobbit breakfast: she lives in Vantaa, where the airport is, and had called me on the phone, by voice, a couple of days before I came to Helsinki because she’d seen her boss at the library put up a Worldcon poster and knew I was coming. She met me at 9:30 in front of the hotel and Roommate took a picture of us before we were off to the famous Karl Fazer Cafe for coffee and juice and sweet buns and a small dark chocolate-sprinkles-covered potato thing that was so amazing that I went back for another with my second (free) cup of coffee.

We talked and talked and talked, and Julia gave me booklets with amazing pictures of her church and two children’s books in Finnish, one about culture and history and the other about the alphabet (I can’t read them but they’re fun to look at!).

I thought I didn’t need to go to the Invented Religions panel because I’d read in the Thursday morning newsletter that George R.R. Martin would be on it, and I fully expected a repeat (only worse) of “celebrity eclipsing panel”. I’m not interested in Game of Thrones or its religions, and anyway I already heard more than I wanted to know about those at the Kirchentag in Berlin. But what I hadn’t noticed was that the announcement had been explicitly revoked in the Thursday afternoon newsletter and the Friday morning newsletter! I was in time for it, and I could have gone, and I’m still regretting that I didn’t. But I made a tour of the trade hall, and didn’t buy a T-shirt for an obvious reason. 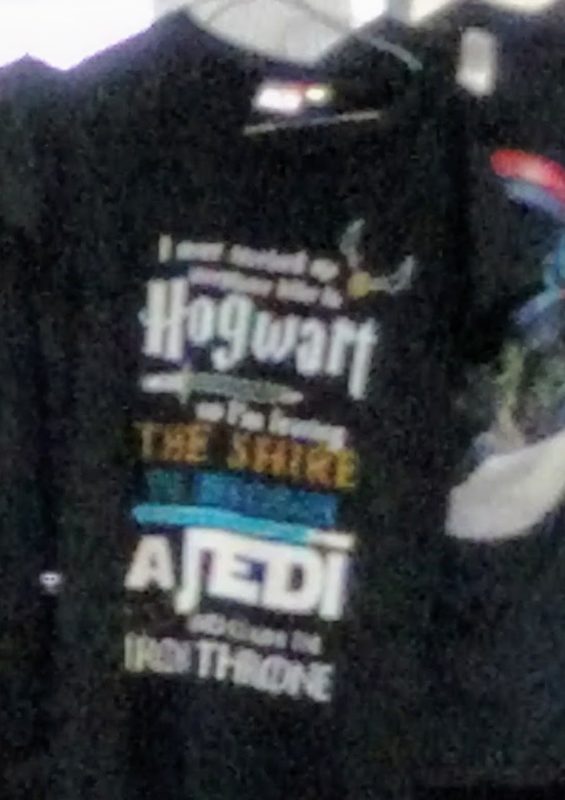 Sorry for the crappy quality, but I was trying to avoid getting any people in the picture and didn’t particularly want the stallholder to know I was taking a picture of the T-shirt. It reads: “I never received my acceptance letter to Hogwart so I’m leaving the Shire to become a Jedi and claim the Iron Throne”.

Now if it had said “Hogwarts” I’d have bought it immediately, whatever the price. It might have been deliberate, but I don’t think so.

I realised I’d learned how to con when I was hanging out with a group of Heather Rose Jones’ fans at her signing table and someone (not in that group) tried to take a picture of me without asking. I stopped her, saying “Yes, you may take a picture of me, but I prefer to be asked!”

Heather wanted something substantial to eat because she was on an awkwardly-timed panel later (Alien Language in Science Fiction, see below), so the whole group sat at a table in the Eat & Meet restaurant having an unoffical Kaffeeklatsch over lunch. I’m flattered that Heather actually used something at the panel that I’d come up with!

This was not the Alien Languages panel yet! It did have David Peterson on it, and Greer Gillman as well, who doesn’t invent languages as such but concerns herself with “strategies for estranging using the English language”.  I learned that Estonian is partially an invented language: in 1919 Johannes Aavik published a dictionary of 2000 new words, many of which are still in use.

(At this point the panel started to be mostly about engineering existing languages. Interesting but not what I came for.)

John: can’t talk about Chinese language without talking about politics

Anne: making up a language is much more fun than a relex of English
(relex = “it’s just a code really”)
Anne makes up languages for her books and then uses just a couple of words of it in the text, like a line of poetry, but the thing needs to exist for her to do that.

Greer: Hildegard’s Lingua Ignota “the tongue of angels”. The only surviving words for animals in Lingua Ignota are ‘bat’ and ‘griffin’.

David (I think): the Darmok episode in Star Trek: the Next Generation, “how can you have the universal translator work and still not understand what was said”.

Met Roommate again after the panel and we went to the Unreality concert, which was splendid but I had to sneak out halfway and queue up for Alien Languages. This was the first time I encountered the “end of line for X” signs, held and passed on by the last person in line. BRILLIANT.

Here’s the panel on YouTube. Some of the hilarious pre- and post-panel banter got recorded as well. Watch it! I didn’t take any notes because I was absorbed. Lawrence or David: How many of you are language creators? (half the hands in the audience go up) How many of you would like use that for a book or a movie production? (only a few hands go down)

Lawrence is the president of the Klingon Language Institute and I can believe there’s much Klingon in him. He didn’t take over the panel as he’d warned us about, but he did tell some really amusing anecdotes.

I wanted to ask if there were really native Klingon speakers, but when question time had arrived there didn’t seem to be any opportunity for it. I did exchange business cards with him and give him a bookmark — getting better at self-promotion, too. 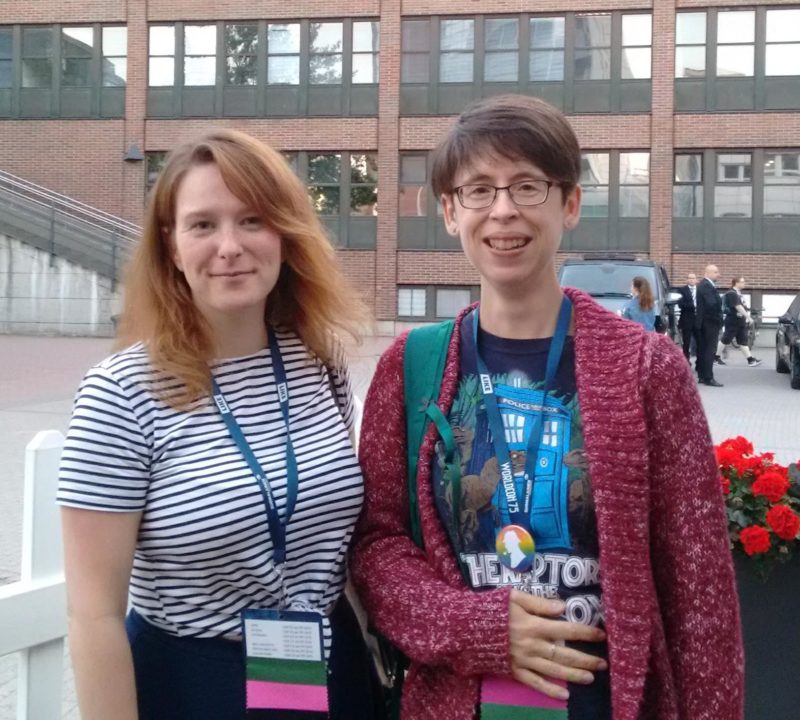 This was an extra-long panel, I hadn’t eaten yet, and there were already huge queues for the Hugo ceremony. Anyway, I’d more or less decided not to go, so I went to sit outside the Terra Nova bar with a bunch of people (including @8ookmonster and @selenay, pictured). The others had already eaten, but I had yummy mushroom ravioli. We tried to watch the livestream which wasn’t working, but the text livestream was! I turned on my data package — Messekeskus wifi didn’t reach far enough — because Worldcon was what I’d bought the data for, so I might as well use it, and connected my phone to the powerbank that I’d also bought for Worldcon.

And all the right people won the Hugos except, sadly, @likhain. But that must have been because the other person was better still.

All in all, it was probably vastly more fun to sit outside the cafe and be able to live-comment on the livestream than to sit at the ceremony, even though we didn’t see the amazing dresses except in pictures.

I was faintly intending to go to the Injury Mechanics panel, but the company was so good that I forgot completely. We went back to the hotel around Best Novelette and kept the livestream going on the train.