First thing at breakfast I got some lingonberry juice on my dress. Fortunately it was a red dress (my ordinary red dress, not yesterday’s velvet), so it didn’t show. Later, at the station, we saw a door that was pretending to be the other gender. 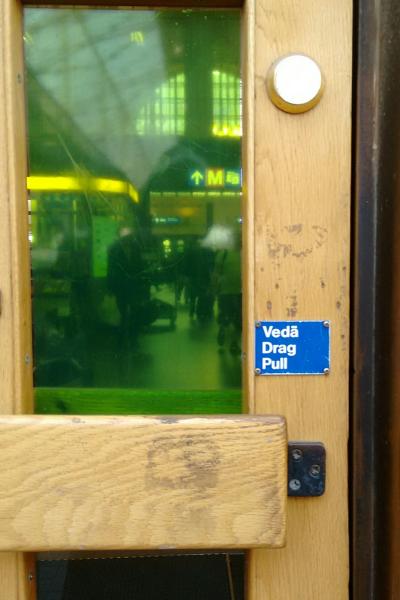 Disclaimer: we don’t know what genders doors can be. (And yes, we also know that ‘drag’ is Swedish for ‘pull’, cognate with Dutch ‘trekken’ and indeed English ‘drag’. It’s very convenient that so many signs here are bilingual Finnish/Swedish, because I can usually puzzle out the Swedish as if it’s Dutch with a very heavy accent.)

There was a sign-up list for Renaissance/Fancy/Exotic Hair Braids, but I seemed to remember that it was in the children’s programme so I asked. “Yes, kids first,” the info desk person said. Well, let the little girls (and perhaps the occasional long-haired little boy) have it! There were several names on the list that all looked like they were of Finnish girls.

For the 10:00 slot it was a toss-up between Older Women in Genre Fiction and Loses Something in the Translation. I went to the latter because it had Gili — if I’d known Catherine Lundoff already, the choice would have been much more difficult.

Loses Something in the Translation: Conveying Humor, Idioms, and Cultural Concepts Across Languages

The only translation panel I ended up being able to attend. It was hilarious; I don’t remember a lot of actual things except that Gili told some anecdotes about translating Harry Potter with marketing people breathing down her neck, and detailed how she’d written a whole new poem to replace Donne’s poem in Howl’s Moving Castle.

Gili: This means nothing to you in English, but in Hebrew I assure you it’s brilliant.

In between, this: (in reply to someone wondering if they could wear a bathrobe to the business meeting)

I’ve noticed that it’s actually possible here to wear
anything you like so why not?

This was TRUE. People were wearing all kinds of things without attracting attention, except that there was much  complimenting of good outfits and nifty T-shirts. I got some compliments on my dress-up dress on Friday, and said “excellent!” to a man in a perfect tail-coat, and took a picture of a woman looking for all the world like Maia’s aunt the sea-captain in The Goblin Emperor.

At one point I sat down in front of the cafe with a cup of tea and a piece of carrot cake, wearing a plain red dress and simple linen cap, and the people already at the table asked “what are you portraying?” I said “I’m not portraying anything, these are my clothes!” Indeed; though I don’t wear the linen cap as often as I’d like, I do wear the red dress a lot. I am glad it’s brick red rather than scarlet, and the linen cap is tiny, or I’d have looked uncomfortably like something out of The Handmaid’s Tale.

The only thing I took away from this seems to be “do we want to write about a world without disability because nobody is disabled, or a world in which disability doesn’t make a difference because everybody can have whatever technological assistance they need?” A great part of it was about science fiction rather than fantasy, but some of it was about magical healing, and the autistic people on the panel agreed that they’d probably refuse to be magically “healed” of their autism because it’s something that makes them what they are. And perhaps that goes for some physical disabilities, too.

I had lunch at Hesburger — they advertised halloumi burgers all over the city but the small branch in Messekeskus didn’t have those, so I ate chicken nuggets and took my Coca-Cola (well, Coke-flavoured ice water by then) to Rauhanasema, the Peace Station, a wooden building beyond the library that’s joined to Messekeskus by a footbridge. A nice intimate room, where I got into conversation with Catherine Lundoff at once and followed her on Twitter and vice versa.

Yay, another panel with Caroline Stevermer and this time she got a fair share!

Daniel (who incidentally had a splendid braid wrapped in a leather thing one gets at a motorbike supplies store): You should have known what you were in for by coming to this little fantasy house in the wood.

Caroline: the One True Something.

Catherine’s definition of a successful romantic subplot: the reader goes “Come on! Come on! You two should be together!”

Daniel: Lord Wimsey and Harriet Vane
Me: May I pick a nit? Lord Peter.
Daniel: Oops, thanks, I always get that wrong.

The panel agreed that a romantic subplot is no good if it doesn’t resolve — doesn’t have to be HEA but at least some people ought to end up in some way happy, even if that means leaving each other because they can’t be together. Also, should be plausible, not completely out of the blue. And love triangles are THE ABSOLUTE WORST.

This made me realise that I actually have a fairly successful romantic subplot in Terms of Service: the protagonist saves someone’s life almost accidentally, doesn’t meet him again until much later, they become friends, then (cautiously) lovers, and only then does it occur to her that this man who was always faintly familiar is that man. I don’t know if unspoiled readers will notice, but it’s there.

What’s also there: in Harry Potter, unspoken tension between Sirius and Remus.

I’d marked Pullantuoksuinen – Writing While Multilingual for the next slot, but it was quite a walk back to Messekeskus and the queues had been steadily growing. Also, there was a new interesting-looking program item, right where I already was:

What Makes a Good Baddie?

Only two of the three panelists turned up. It was a good thing it was in the small room, because Alter Reiss preferred not to use a microphone on the Sabbath, and he didn’t have to! He was practically the whole panel by himself, so he asked the audience to introduce themselves too and I was the first (and eventually the only one) to do so.

Me: Hi. I’m Irina and I can’t write villains.
Alter: Have you tried?
Me: Yes.
Alter: What’s the problem?
Me: I can’t figure out their motivation, I don’t know why anyone would be evil.

Then he (and the moderator “standing in for the rest of the panel”) went on to explain all kinds of motivations for villains — greed, ambition, not quite being evil but too selfish to see other people’s needs — and that was instructive and interesting but still not much help for me.

I walked back with Alter and we reminisced about the old rec.arts.sf.composition days a bit. Then I drifted round the trade room, and bought another book! and a single earring! and a small print that I got at a discount because I was wearing an “Orc in Pink” pin! I also saw the queue for George R.R. Martin’s signing, which gave me delicious schadenfreude.

I’d have liked to be at the Pre-Potter Wizarding Schools panel, but after two gripping panels back to back I needed TEA. (This was when the people asked me what I was portraying.)

I’d figured out that I could try to get to the Vigil at 18:00, so I could to go church and still be at the con on Sunday! I’d already worried that between the church and the airport I’d miss the whole Sunday programme. Eventually I decided to go to the hotel and dump my heavy bag and have a leisurely shower instead of trying to catch a 16:00 event and going to church with all my con stuff and possibly arriving late. 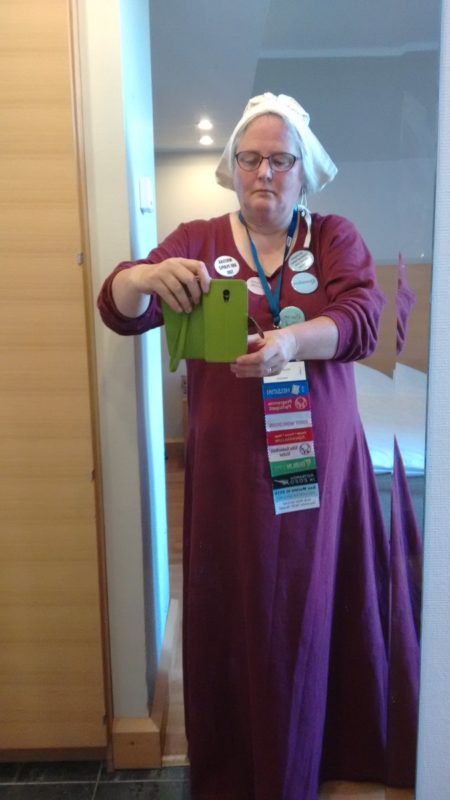 In the hotel lift a woman asked me “would it be very rude to ask why you’re dressed like that?” Instead of the proper response (“yes, it would”) I stammered something about being at Worldcon, but her 3 floors weren’t enough for an elevator pitch.

I did change for church (into the batik shift dress). The church was as easy to find as I’d anticipated, and not as far as Google Maps guessed — I should have known that GM massively overestimates walking times. If it learns from its user, it’s probably because I mostly use it when I’m searching (so going more slowly) rather than purposely going somewhere.

I only stayed for Vespers, because I was too tired (and anticipated being too hungry) for a whole Vigil (in Finnish), but I did buy a muistelukirja from the man selling candles at the back. To be honest, I was glad that I didn’t have to choose between explaining myself to someone in order to receive Communion, or foregoing Communion! Anyway, it was good to be there, and interesting to hear the same tunes we use but sung in Finnish. It sounded like it’s sort of natural in Finnish, unlike French where you can hear the language strain against the tune.

I thought Roommate would be staying on, perhaps for filk, so I took a bag to go to the supermarket — only to find that it had suddenly started thundering and pouring with rain! It had already been somewhat dark, but the rain had started while I was in the lift down. I went back up to get an umbrella and put on sandals instead of shoes and socks, but the lock didn’t seem to like my keycard any more and it took me about 20 tries to get it open. (Later I heard from someone in another hotel that they’d been warned not to keep the keycard near a phone. That must be it, because I’d been keeping mine in my phone case.)

I bought pickled herring and squeaky cheese to take home and some bread products (a sweet bun and another Karelian pastry) and a single-portion cloudberry yoghurt to eat at the hotel room, with a bottle of Extra Dry cider.  Then I ran into Roommate on my way back, so we went out after all, to the ramen restaurant where she indeed had ramen and I had deep-fried chicken bao. Bao with deep-fried chicken, that is, the bao itself was steamed as it should be. Yummy, cheap, with free water (as all Finnish restaurants do, I think) that came from the spout so slowly that the server said “it comes all the way from Japan”.