This was my bonus day! Granted, it was only about half a bonus day, and next time I go to a con I won’t take the last feasible plane on the last day but the first feasible plane on the next day. Or even later so I can go to the Dead Dog party and not worry about waking up in time. “I can skip church but I can’t skip the airport” was what I told people when promising to be at their events or apologising for not being able to be at their events. This meant that I never saw Anna Feruglio Dal Dan, which both of us regretted.

Wow. I really want to read that book she’s writing. Also, I want to read all her other books, including Exit, Pursued by a Bear. The other reader, William Ledbetter, I didn’t know (and Greer hadn’t known him either before then) but his story was intriguing and I got one of the two copies of F&SF with the full story in it that he was giving away — if I’d known Greer was also giving things away I wouldn’t have put up my hand, but it made nice train and airport and plane and train reading though it’s so much not my genre that it’s something to read once and give away. (Trying to give it away now, but I don’t think our current house-guest wants it.)

Then I ran into @DiamonDie and her co-editor who sold me a copy of their little Finnish drabbles book, fortunately in English, and signed it.

Even though this was one of the things I’d tentatively marked in case I would skip church, I sat well to the back of 101a-b because I thought I wouldn’t have the energy to be very attentive. I lost all interest when someone on the panel said it was “really” about modern healthcare, but then they were taking questions in the middle rather than at the end (useful! makes it possible to expand on things people are interested in) and a couple of things were said that gave me a story idea (someone gets a replacement body better than their original one but wants the old one back; minutes later Robin Hobb said the same thing). Later I read a tweet from @selenay who I hadn’t realised was in the room, saying she’d also been jotting down story ideas.

While waiting for the concert I took out my green plastic spork to eat the cloudberry yoghurt, but it had broken in half, leaving me with a separate fork and spoon with a very short handle. I couldn’t use my food multitool, because it includes a knife long and sharp enough to be a “weapon” for Finnish law so prohibited at the con. The cloudberry yoghurt wasn’t as interesting as I’d hoped. Ah well.

The choir had started out as a children’s choir, but no children came to sing so they opened it up to everybody. Roommate was in it, and I’d more or less intended to go as well but there was something else I didn’t want to miss every single time.

The concert was an “open rehearsal” and the audience was invited to sing along! “You may sing along, and at the end you must sing along!” There were some good voices — I complimented one woman at the end and it turned out she had the same kind of choir experience as me, fewer years but from a similar age. And lots of joy and spirit.

I may have volunteered to run a rounds-singing workshop with the choir director in Dublin. Gave her my card, forgot to ask her email address as well, hope she mails me.

I’d have loved to go to either Names in Translation –very interesting subject– or History as World-Building –ditto, and with 3 friends on it– but both started at 3 and I wanted to be at the airport at 4 at the latest; the thunderstorm had made a tree fall on the train track, so there were fewer trains running anyway. I walked around a final time to say goodbye to people, but I found only two including Roommate.

Just as I was leaving my Nethack partner-in-crime caught up with me and wanted to take a selfie with me: “I’m collecting author selfies!” 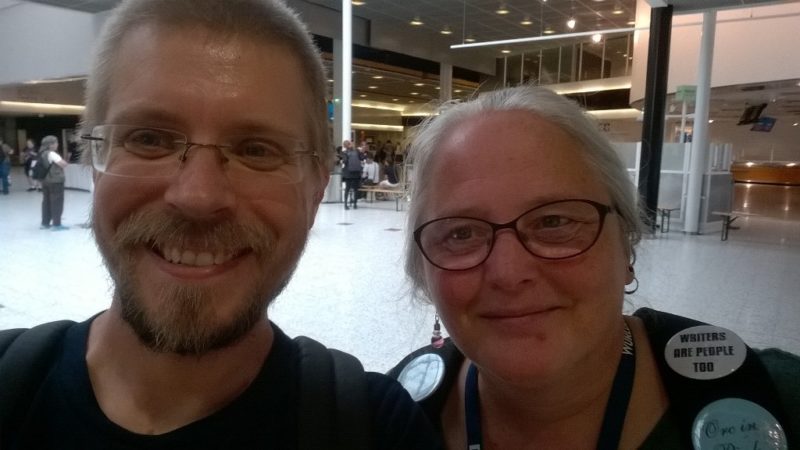 I wanted a “Fake Geek Girl” ribbon but the Geek Girls were away every time I got to their booth; when I finally found them in attendance on Saturday they’d run out.

I’d have liked to catch the person handing out pronoun ribbons. Though I’m pretty unambiguous it doesn’t mean it’s not a good idea to wear one: makes it a less marked thing.

I’m in favour of “paying forward” as a principle, but the ribbons saying that were from the Heinlein Society, and Heinlein has too many … issues … for me to be in favour of that.

But I’m fond of the one reading “Sei die Milch! Sois le lait! ¡Seas la leche! Süt Ol! Ole maito” (Be the milk!) — expressing that Worldcon should be Worldcon, not Anglophone Con. One drop of water in a cup of milk doesn’t make a difference; one drop of milk in a cup of water is visible. Even though I should perhaps have known the fannish history of the person who gave it to me (Rene Walling) and ignored him. Ah well, one can’t know everything.

I think I got the right balance of attending things, just goofing around, eating and sleeping. I might have caught some more panels and presentations but that would probably have worn me out much earlier than in the middle of the last day.

I didn’t do some outside-the-con things that I’d intended to do: use the hotel sauna, swim in the Finnish Gulf, sample the local beer. The sauna because it was open for women from 4 to 7 in the afternoon/early evening, when I was at the con, or eating with other people, or on my way to the hotel to arrive too far into that timeslot. The swim because it was a hassle to get there, and would take a lot of time, basically half a day, and I was missing so much already because I don’t have the gift of bilocation. Well, I suppose the Finnish Gulf isn’t about to go away any time soon. The beer because I hung out with people who weren’t beer drinkers and some of them didn’t drink alcohol at all. Water with meals was free everywhere (and at the Eat and Meet place at Messekeskus even milk) so that was what I mostly had. If I’d been with a different crowd I might have gone to brewpubs with them, but it just didn’t happen.

I brought exactly enough clothes, and exactly the right clothes (except that nobody except Roommate, who also saw the back, noticed my <body> </body> T-shirt). Next time I might bring more headgear, even the ridiculous hat.