I’m listing things I attended and hanging everything from that, not trying to be in any way coherent. I could technically have gone to a lot more events — I had the time slots — but waiting in line put me off, and sometimes I was in a conversation that I didn’t want to end in order to go waiting in a line. Or just have tea by myself and shut my brain down for a while.

BREAKFAST. Finnish hotel breakfast. They had Karelian pastries. No fish except salmon, though, so I had curd with berries and a Karelian pastry and rye bread with cottage cheese (or cream cheese, they had both and I ate both but not at the same breakfast). And coffee with hot milk; I’m so used to having caffe latte or Milchkaffee or whatever it may be called locally in hotels because the tea is no good, that I completely overlooked the fact that this was Finland and they had black tea that I could put actual milk in. I think it was Saturday that I realised that, after I’d had a cup of tea at the con cafe on Friday afternoon, and then had milky tea and black coffee the remaining two days.

We were really early to register, which was a Very Good Thing because when we were on the way to the first panel there was already a huge line. I didn’t get a First Worldcon ribbon, because I was down as Adult (without the tag) and when I asked about that I did get one but wasn’t sure I wanted to wear it because I didn’t want to be singled out by helpful people like Maree in Deep Secret. Then I saw that so many people were wearing it, even volunteers, that there was little danger of that and I stuck it to my badge anyway. Later, I saw rainbow First Worldcon ribbons much prettier than my white one; this seems to have been completely random.

I stuck my rasfc cat-vacuuming pin and the refound IDIC pin on the “I [bear] Helsinki” ribbon that was also in the con bag, and LOST THE IDIC PIN AGAIN on the first day. For real, this time. The cat-vacuuming pin is still there, though I have two more (without pin backing but that’s easy to fix) of that.

When we sat down with coffee Heather Rose Jones came along; I turned out to be the first person she’d seen that she knew! She gave me a copy of The Mazarinette and the Musketeer so I’d have something for her to sign and a rare Alpennia ribbon, and I gave her one of the USB sticks for special people (I had only 8) with my books and cover art and author picture and a bonus short story on it.

Well, that was sort of mandatory, not only because my roommate was on it and I wanted to support her (hi @selcaby) but also because, you know, Diana Wynne Jones. I took near-illegible notes in my little green notebook in order to blog, but didn’t have time/energy to write a blog post then and there. Some high points:

Goldeen: We’re assuming you’ve read all the books, no fear of spoilers.

Gili: I managed to lose the first child within 10 minutes of registration.
Audience: Is that the same one you lost in a lake once? (It wasn’t; and anyway that was a castle moat)

Eleanor: I had a Diana Wynne Jones-shaped hole in my brain.

About Power of Three: There’s nothing magic about words, they just do things when you say them right.

An agent (as related by Gili, I think): Fire and Hemlock woud be better off without the fairies, just as a real-world problem book. (ARGH! I wouldn’t have wanted to read it then!)

The drama is being played out through the fantastical.

About Ann in Hexwood: an ordinary girl having adventures, not a space princess in a generated universe. The ordinary life she’s having is actually a fantasy adventure.

Naomi: Children see the situation they are growing up in as normal, until they can step aside a little.

Goldeen: when Charles’ world merges with Janet’s world, what we’re going to see is more magic cropping up. We should be more Ayewards than we are now. (that’s a nice mashup of 3 different books!)

Virginia: I’m sure I’m not the only person in the world who stood at a bus stop and said “Hathaway, send a bus!”  –No, Virginia, you’re not.

Fun detail: the panel was 100% women and (confirmed by Jewish roommate) at least 70% Jewish, 80% if you think, like me, that there’s no such thing as ‘half Jewish’.

I skipped the Invented Mythologies panel though it was in the same room and I had a nice seat near the front, because I wanted some time away from people. Which promptly made me run into several people I wanted to talk to and who wanted to talk to me, of course. I could give one of my special USB sticks to Gili, as well as the bag of wine corks I’d brought for her craft projects, and made her daughter Tali happy with a Krita-plus-tutorials USB keyring (if you want one too, follow that link; end of plug). 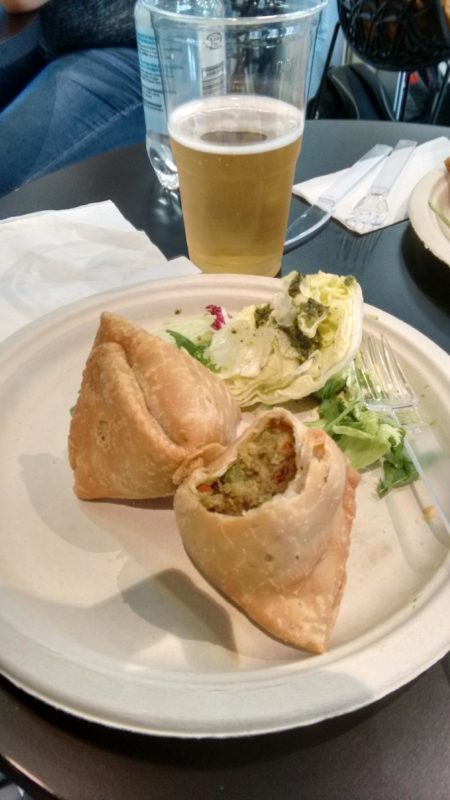 Those samosas were HUGE, two were a full lunch portion. Also salad with mint dressing and a pretty decent cider.

Then there was the Diana Wynne Jones fan meet! I think we set a precedent by stealing chairs from everywhere and putting them in a circle, because all later fan meets did the same thing (or used the existing circle from the previous one, of course). Handicapped by the cavernous hall that made it hard to have an actual conversation with even the person right next to you, we did manage to talk about how we’d come across DWJ, and how her books had made us and people we knew into readers, and exchanged anecdotes about atrocious translations. And I met Greer Gillman for the first time who is a wonderful person (and, as I found out at her reading later, a marvellous writer). We’re setting up a mailing list to organize a Diana Wynne Jones con in Bristol.

I’d met some conlangers who were trying to arrange a conlang meet, and we eventually used one of those plan-a-meeting thingies to plan a dinner at 7 in a restaurant right next to our hotel! So I went back earlyish and showered and changed and sat down with a book for a while instead of going to the Who Needs Gender Pronouns panel.

This was at the Caverna restaurant, which I’d passed going to the hotel and read the sign as “Caveman”. It’s a completely over-the-top buffet restaurant with EVERYTHING, also (unlike Wednesday’s Nepali restaurant and even the food at the convention) as expensive as I’d expected from Finland. “I’m not sure I’m 38 euros worth hungry,” someone said, and had a salad (admittedly huge) instead. I did pay for the buffet and had a round of okay but unimaginative sushi and rather nice dumplings, a round of fruit and cheese, and a round of dessert.

But it was worth 38 euros (plus 4 for a small generic-tasting beer) for the conversation. Two of the people had been to the gender pronouns panel and took it apart, saying it should have been two panels, one social and one linguistic. I was sitting next to Sylvia Sotomayor and said “well, why don’t you and I do the linguistic one in Dublin?” but she’s not coming to Dublin, so I asked two other people instead. And someone else much later but I don’t remember who it was; a woman, not taller than me. If you happen to recognise yourself, please speak up! It was about pronouns and status, rather than gender.

So that’s one thing I have to go to Dublin for. I can actually go to Dublin if my financial situation doesn’t change much; when I made a dedicated savings account for it the bank told me that I could reach the goal with about 40 euros less a month, but I’d rather have an extra buffer. Especially as hotels in Ireland seem to be even more forbiddingly expensive than in Finland. Also, I’m earmarking any donations I get for the book for my Dublin fund.