We’ve been back for a week now, and everything has faded enough from my immediate memory that I can actually write about it without obsessively recording all the details. Basically, we did nothing, which was the objective of the holiday to begin with because both of us really needed that. Found out once again that though I may not be able to speak very good German, I can speak very serviceable German, like saying to a waiter “We have only one fork between us”. My other half was amazed that I knew the word Gabel, but it’s from a song. 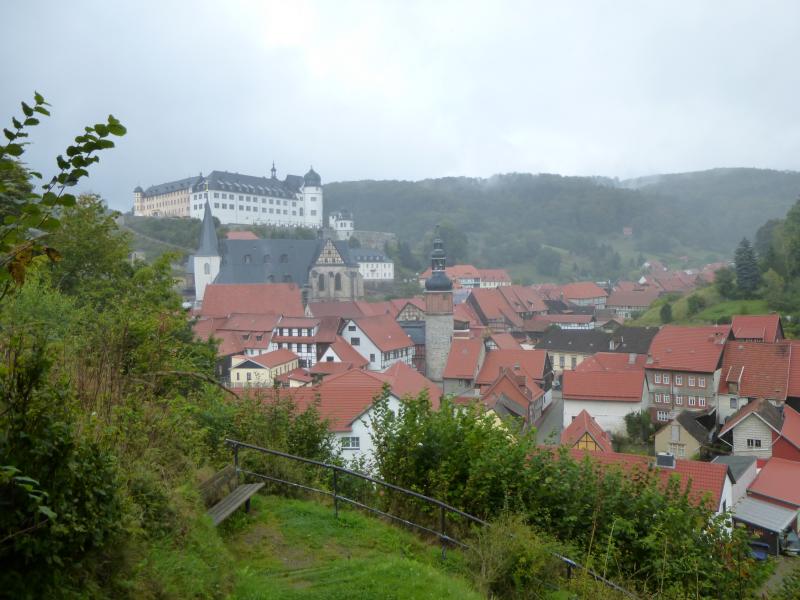 Little town in a deep valley, so all the walks are steep and we didn’t walk much. But the Schloss on the hilltop has a nice garden where we spent several afternoons reading, drawing and writing, though not drawing and writing as much as we’d intended. Ah well, we got a lot of rest and enjoyed ourselves. One good baker, one excellent butcher (the nearest), one touristy butcher that thought a lot of itself, a regional-products shop, an everything-shop, an ATM, a couple of shops we didn’t need though I’m a bit sad that I didn’t see the pretty earrings in the jeweller’s window until there wasn’t a day left that it would be open, more than a dozen restaurants though we only tried three and came back to two, one with pretty decent Italianish food and one with YUMMY GERMAN FOOD. 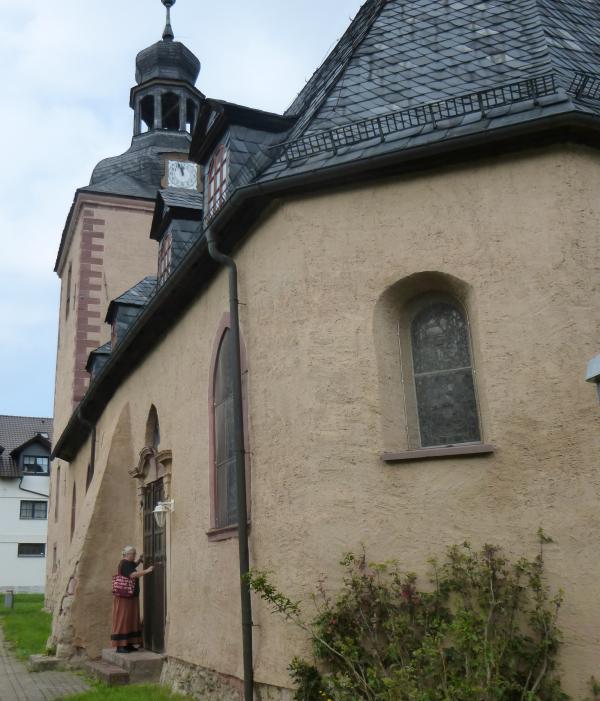 The only things impossible to get in Stolberg (in shops, anyway) are fresh milk, fruit and vegetables. I like German supermarkets but going to the supermarket took half a day so we didn’t do it often. The nearest supermarket (two, in fact, a stone’s throw from each other) was in Rottleberode, which also had DDR apartment buildings and extensive roadworks and a closed church and a closed pub and one, count it, one cafe that was open but didn’t look as if we wanted to be there.

What Stolberg did have was a very nice swimming pool. The first time I took a ticket for the outdoor pool only, without even access to the changing rooms, and that was kind of disappointing (small, shallow –marked Nichtschwimmer– and warm) but when I paid one euro more for the whole thing the next day I realised that the pool was meant for play. Not like “swimming paradises” in the Netherlands that think they need to entertain the swimmers with stuff unrelated to water, but a splendid collection of water toys. I played Bachforelle with a six-year-old girl by swimming against the current of an artificial waterfall, and stood on underwater jets, and even did a couple of laps in the 25-meter pool “for swimmers” that looked like an afterthought in that playground. What I’d gone inside for was to check out the sauna, but I had to go back for that on Friday because only then (and on weekends, but I thought it would be too crowded) it opened early enough.

And I bought clothes. In Magdeburg. Normal people, when they buy clothes on holiday, go to Paris or London or conceivably Milan, but then normal people don’t buy their clothes from Aloria. The haul was three very different shirts (one a bit mind-the-gap, oops, have to buy a purple underthing) and a magnificent skirt of alternate green and black panels. (I wore it to church last Sunday with the gilet that a friend made for herself but couldn’t wear because black doesn’t suit her, so she gave it to me; success!)

The route to Magdeburg was via Quedlinburg, and there was actually a direct bus to Quedlinburg from our corner bus stop, but there was no way to get to Magdeburg and back and catch the last bus so we got a room in Quedlinburg and went back on the next day. This gave me cause to tell a taxi driver “We want to go to Hell” but he was apparently used to that. 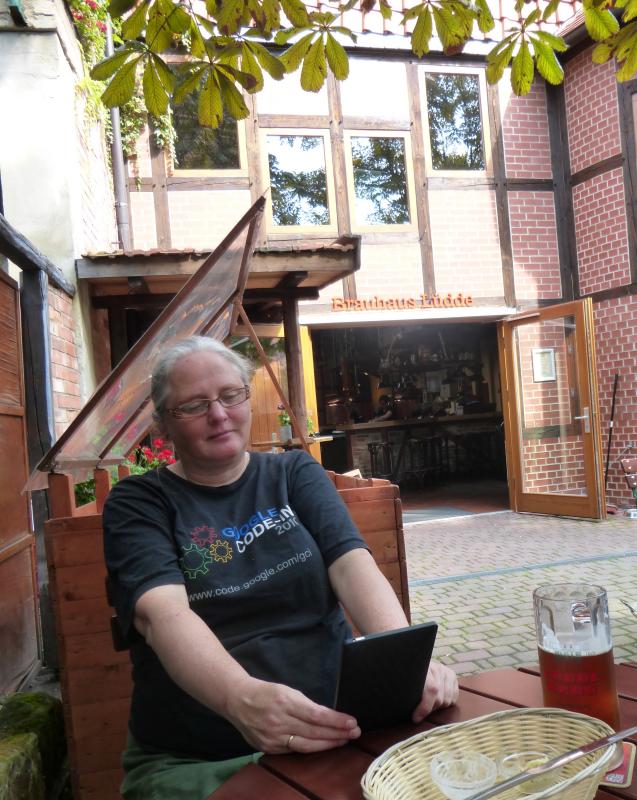 Beer and a book. What more do you need?

Breakfast in the town square, lunch at the town brewery, bought Saale-Unstrut wine, took the last handy bus back in the afternoon. Unlike our previous time in Quedlinburg we managed to go to the museum, by carefully avoiding the scary church (converted to a place of, er, worship of something entirely different in 1938; when we were there with the girls in 2006 it shocked us so much that we didn’t have energy for the museum and had to resort to ice cream). Also found the same bookshop that we’d bought books at last time, and I didn’t only buy Gritlis Kinder, a delightful nineteenth-century tear-jerker, but also background reading for my intermittent alternate-history efforts. Finally I can find out how, and when, to prevent Bismarck from unifying the German lands.

Somewhat awkward to get to, because it’s only open on weekends when the buses are inadequate. Probably because buses are for schoolchildren, not for tourists, <rant>”everybody has a car anyway”</rant>. I’m glad I went, it was quite an experience, though mostly a cringeworthy one. I don’t like German toilet humour any more than I like Dutch or English toilet humour, and half of the mousetrap museum was in fact the chamberpot museum. I don’t know if there are only ever tours (the website lists opening times) or I was unlucky in falling into a tour (someone’s birthday party, in fact) but all we got was a woman who couldn’t resist trying to scare us by telling us how scary it was. “Isn’t that splendid?” she said every three sentences, too. And, dear lady, you don’t embarrass a nine-year-old boy in front of his cousins. I’d have loved to just walk around and see more than the three or four mousetraps she showed us: the walls were full of really interesting things. Then I had a beer by myself at the station cafe, which felt strange — I hardly ever drink beer in public when I’m alone — but I saw a splendid steam train. If I’d only thought of buying a ticket, I could have travelled halfway to Stolberg on it, but I didn’t know if there would be a connecting bus on Saturday anyway.

On the way back home, this, at Berga-Kelbra station: 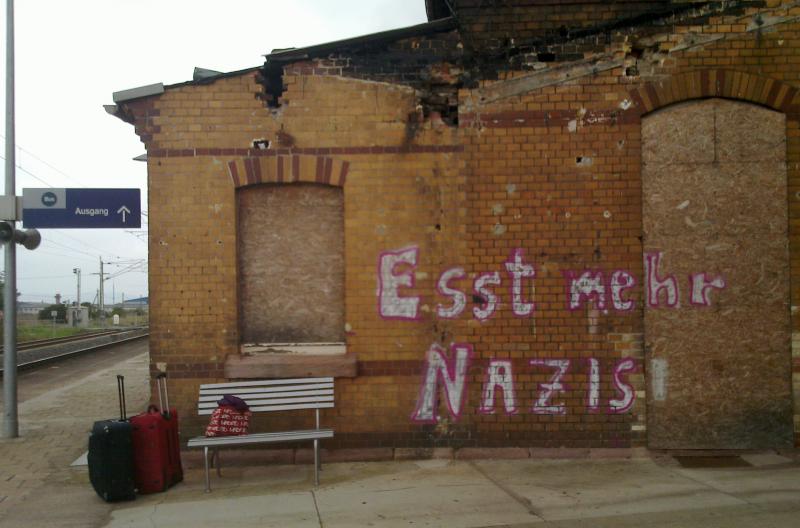