A Day of Meetups, it seems. Though I also managed to go to 2 panels, a very good one and a meh one.

I was actually at the conference centre (henceforth CCD) at half past nine in the morning, showing T and K where to register. Then I lost them, a good thing, I could be sure I didn’t have to herd those cats any more. 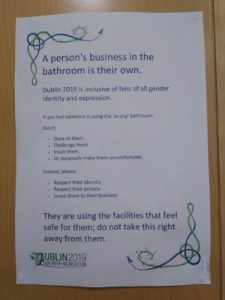 Another good thing: the sign on the inside of the lavatory door. I tooted (on Mastodon) about it, which propagated to Twitter, and got dozens of likes in both places in a couple of hours. And I wasn’t even the first to mention it!

The ethics of secret power

Stephanie Katz: what part of the world do people come from?
People: * all different countries *
Taijo Fujii, coming in: Morning!

Where are the Potterverse soup kitchens? (In Fantastic Beasts the anti-wizard antagonists work very hard to feed hundreds of poor children, while the nominal good guys live in luxury.) I could have told them — but didn’t — about Maile and some of her peers! But then that verse isn’t the Potterverse.

Why do superheroes need secrecy? If it’s just one person who can be hurt, harmed through their family, the secrecy makes sense. We put our trust in these heroes that they’ll do the right thing.

Working with a team: the whole is greater than the individual. (The bad guys don’t do that so much!)

Marcus Gipps: We know that in our real world there are secret societies of varying levels of secrecy. Of course there are probably secret societies we don’t know about, which is more of a problem.
– Freemasonry, old school tie, get a leg up from belonging, is that ethical?

Conspiracy theories – there must be something going on, someone wielding secret powers for evil.

“of course *I* would only use it for good”

E.C. Ambrose: what you (Stephanie) describe as escapism is probably empowerment, we want to read about people using their powers for good so we can imagine we are those people.

The banality of evil: “I’m not the most powerful person, but I have power over *you*”.

Mentor archetype, guiding you in the right direction

Jewish tradition: 36 righteous people in the world doing good, if they are outed they’ll die, usually only recognised after death
this: https://en.wikipedia.org/wiki/Tzadikim_Nistarim Throws a whole new light on “Certainly this was a righteous Man!”

Secret powers hiding in plain sight, like tech skills, “I worked hard for my power”. Education is now a sort of superpower, controlled by gatekeepers, keep certain people in and other people out

Vast amounts of wealth is in itself a superpower.

The good guys have teams, the bad guys have minions. Minions are reliant on the villain’s favour.

ECA: when we have power we tend not to want to share it (who are you calling “we”?)

“Power should be given to everyone so no one is special” this is my gripe with The Rainbow Fish, too, make everybody the same so nobody is singled out either positively or negatively. I think power should be shared so EVERYBODY is special, like at Worldcon, where for a couple of days we have the illusion that the world is actually like that.

I wanted to go to “Introduction to own voices” then, if only to find out whether my fears that it’s yet another sort of gatekeeping are founded, or else “Problematic favourites and the death of the author”, but I saw the queues and despaired and went in search of food and coffee. And my first pair of earrings! To wear with my red velvet dress because I’d left all my amber jewellery at home. As well as my rainbow IDIC pin that I’d ordered especially for Worldcon. (Though it might be in the depths of my toiletries bag; I found only one of the two I ordered in my writing-table.)

There were several delectable concerts but they were all at the Point, where I didn’t go until Saturday (see next post): that made me miss them all. Some people I knew were hanging out at the Point most of the time and got much more music. Ah well, one can’t have everything.

But I had THIS. Lowest point: we did a names round. I was almost last, which was a good thing because it gave me lots of time to prepare and lots of examples, and a bad thing because it gave me lots of time to build up anxiety. After this we just hung around and talked, a lot better. Highest point: Michael, aged ten or so, who had a galaxy full of warring planets with his friends, all with their own languages. I asked him “do you read fantasy too?” and when he said yes, gave him a pair of bookmarks and told him there’s a good battle in Gates and Passages. There was, of course, the ubiquitous Esperantist who did nothing but promote Esperanto, but he (it’s always a he) was universally ignored.

It was impractical that the room had been set up for a panel when there was a meetup (later that day another meetup I was at had the same problem) but at least it came up in the feedback session and got fixed on Saturday.

Cultural appropriation: a product of a shrinking world?

Interesting but not as relevant as I’d hoped. Right from the beginning I started to think that this panel was not really for me: cultural appropriation as such isn’t strictly a US thing, but the focus of the panel was.

Why the focus on the US? Probably because the US has so many branches of cultural heritage but the powers that be are cishet white male.

Global ≠ US only

Borrowing from another culture than one’s own doesn’t always need to be a deep cultural experience. We (= non-[white cishet male abled US-of-European-descent] people, so about 80% of the people in the room) are not a gateway.

Missed “Angels and demons: Christian mysticism in fantasy” which might have been more interesting and/or relevant. But the queues. It was by then impossible to attend two things back-to-back because there was 10 minutes “hall time” and the queues were at least half an hour long. I could have gone to “Language is a virus from outer space” but I think I was talking with someone. I heard later from someone who had been there that it hadn’t been much different from the alien languages panel in Helsinki. (Which had the advantage of having both Heather Rose Jones and David Peterson on it; this one had four people I didn’t know at all.)

I really wanted to get into the 18:00 thing, so I was in the queue very early when there were only about 4 people in it and had a nice talk with a Dutchwoman, first in English, and then I asked “why are we speaking English when both of us are Dutch?” so then in Dutch.

It almost looked as if we were going to have a names round again, but the woman more or less in charge (she was behind the panel table) started out by asking “who has this thing? who has that thing?” and we had a very merry round of that instead. I got to mention my ACTUAL NEWFOUND SUPERPOWER of sign-reading, and someone else had something similar! And there was a man who I’d have liked to talk more with (but didn’t get round to that, both of us were talking with other people) who has another thing I have as well, that we’re completely comfortable when alone in anonymous surroundings (like on a train) and sometimes seek that out on purpose when we have to do some thinking. He goes to London for that.

Very good atmosphere of “I am not the weird one! It’s the world that’s weird!”, bracing and empowering.

This was what I’d asked to postpone the NetHack meetup from 19:00 to 19:30 for, though someone protested that people would then have to miss 2 things because events in the CCD were on the whole hour. As it was, there were only 8 of us, 9 when the very jetlagged flatmate found us in the bar when we were almost leaving.

I was wearing my “peaceful thaumaturge called Raisse” T-shirt, but found that I’d lost my ridiculous hat, probably on the Holyhead-Dublin ferry because I remembered wearing it there for a while and then putting it in my pocket (or, more likely, outside my pocket). Ah well, it wasn’t something to actually wear anyway, though it’s a pity because it was a unique item and the outfit that made it went out of business. 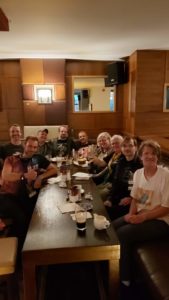 from our apartment (Roommate, who isn’t a NetHack player, had gone to a concert, I think.) Someone knew of a less crowded bar than the pub we originally wanted to go to (it’s too famous, I think) so we went there, and it was indeed almost empty. Not the kind of bar I’d go to of my own accord, but with the group it was okay, except that here was live music by someone who sang 70s-to-90s rock songs, not very accurately, only very loudly. We asked if the amp could be turned down a bit and the waitress said yes but just like in NetHack, Nothing Happened.

We did have lots of good talk. One person offered to get me past the queue to see the Book of Kells and I almost took him up on that but that would have been Saturday when I was too busy/distracted /confused to take any action outside Worldcon. I’m still somewhat sorry I didn’t get to see the Book of Kells, but that just means I’ll have to go to Dublin again when there’s no Worldcon taking up all my attention and energy.