(The Pit of Despair)

I was wearing my velvet dress! With the new wooden earrings! Nothing on my head, though, I brought my green maid’s cap but neither the colour nor the style went with the dress. I wish I’d had at least a square of something white and sheer to wear as a kerchief, but alas.

We (two flatmates and me) wanted to get into “Misconceptions in medieval history” but we were late so it was already full. Instead we went upstairs where there was a “full contact medieval combat demonstration” going on. The other two went elsewhere after a bit, but I stayed for the whole thing, and it was very exciting. I learned a lot about armor! (And yes, women can fight men. Though they don’t do that in their normal competitions. This woman was small but fierce and I think she won the bout, though they weren’t really competing, only demonstrating.)

I should perhaps have gone to “Improv as a writing tool” — Roommate did and liked it — but that would have made me miss the next one, and I’m glad I didn’t.

The notes don’t do justice to the excellent panel. Leaving this here as-is for later reference. I think all the panellists were mothers (but I’m only 100% sure about Aliette de Bodard, who has two small sons).

Rivers Solomon: My statement about the depiction of mothers in science fiction and fantasy is that there’s a lack of it

Rogue One: daddy issues, having the engineer be her mother would have been so much more exciting.

RS: families are baggage, heroes must be unencumbered

AdB: parents can’t protect their children from everything

AdB: difficult to ask for help, means that you’ve failed

AdB: Pregnancy as body horror – can’t be the only story we can tell ourselves (that’s a book-meets-wall thing for me, I like a content warning if a book has that so I can avoid it)

AdB and KE: main function of the breast is to actually breastfeed the baby

KE: the insidious trope that women have no important links

AdB: mother as the vessel of the chosen one, Virgin Mary, the child matters much more than the mother

AdB: how often do you see toddlers or young children in science fiction, skip immediately from young babies to teenagers

RS: recommends “girls made of snow and glass” (and I think I might want to read that, yes)

Sylvia Spruck Wrigley: how much of this is a genre problem?
AdB: crime fiction has it too

Audience: you can’t be a damsel if you’re dead

AdB: you have to push back against the tropes
RS: I’m all for expanding the scope of the tropes but not at the cost of women’s erasure

But for the queues I’d have gone to “There be dragons! Crafting maps for fantasy worlds” because mapmaking was what I wanted someone to give a workshop on (but didn’t have the skill myself, or the right contacts/influence to cause it) and this was second best. But there was a Naomi Novik reading half an hour later: from her new trilogy, about a magical college (as in: what you do after high school, an advanced vocational school rather than a university). I so want to read that! Unfortunately it doesn’t come out until the autumn of 2020.

This made me too late to queue for either of the 15:00 things I’d considered: a fireside chat with Diane Duane (I’m not fond of sitting through a 50-minute interview, but it was sort of my only chance to see Diane Duane at all) and “What I learned along the way” (how do writers keep writing in the face of failure, which is something I’d really like to learn because rejections almost made me stop writing completely once). I don’t remember what I did instead — probably just hung around for a while — but then I went to the Point (cinema and other buildings at the docks hired for the purpose, where all the art and music was; it was confusing), saw some of the art show, and tried to buy a Citizen of Europe pin. There was a sign that the pins were available at the “print shop”, and when I asked the art show crew where that was, they pointed me to the end of the hall, where some people were operating an old hand-press. I was too much in the mid-con Pit of Despair by then to actually enjoy it — mostly I love old printing presses — but asked the people about the pins without much hope, and indeed they’d never heard of them. Ah well. 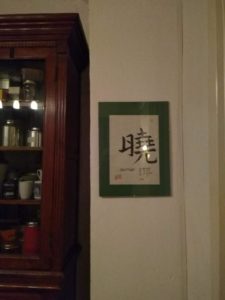 In my writing space!

Going back, I spotted an online friend I’d been looking out for and we talked for a bit. Then one of the printing people (an eager young Irishman) came running to “help” me, making me more or less run away from him and go back to where I’d seen the pins in the first place. He gave up running after me, fortunately, and I went back to my friend and sat down with her while she practiced calligraphy (and eventually made a beautiful thing especially for me). Then I saw the print shop — it was actually a shop in the art show where you could buy prints of some of the art, and it had been staring me in the face all this time! So now I have a Citizen of Europe pin, more relevant for the British than for me, of course, but I’m glad I got it. When I went to apologise to the young Irishman the printers were all gone, worse luck.

I went back to the flat to put the calligraphy in a safe place. It was more or less safe already, because I’d bought a book that was almost A4 (a new second-hand copy of The Road Goes Ever On, which I lost in a leakage incident; cost me 60 euros but worth every cent) and it was flat in that in the laptop compartment of my bag, but I wanted it to be really safe. Also, to change into something more comfortable because I didn’t really want to expose the velvet dress to me-in-a-restaurant. I thought I might make it back for the 21:00 “Send in the crones: older women in SFF” panel — I’d already given up on Diane Duane’s 20:00 Literary Beer, anyway I was sure it would have been full even if I’d queued to sign up the moment I arrived at the CCD — but we ended up in a rather complex restaurant and I didn’t bother to try.

Afterwards, I and other novices got initiated into the basics of Steven Universe (by the mostly-recovered jetlagged person). A whole world to explore when I’m in the mood to watch something.

Next Worldcon I manage to go to, I might want to be on my own (perhaps rooming with only Roommate again), because it was great fun to be with a group of like-minded people but it does come with some social obligations that unavoidably get in the way of other things. I would have liked some more alone time, too, but at the time it didn’t occur to me that I could just have taken that.