I arrived too late for two of the things I wanted to attend, because (shock!) it takes quite some time to get from Holyhead to Dublin on the ferry, and I’d been separated from my suitcase and had to retrieve it (with the laptop inside to make my backpack a more comfortable weight, and I was so flabbergasted at having to put the suitcase through a hatch that I didn’t think of taking the laptop out until it was already out of reach; but it was comfortably padded with clothes, so nothing untoward happened to it). Then there was a shuttle bus to the city centre, which I should probably have left earlier if I’d only known where. I ended up in a street full of Asian snack bars and betting shops (most of the betting shops probably not Asian), hot, hungry and confused. Not so much thirsty: there was still water in my water bottle. 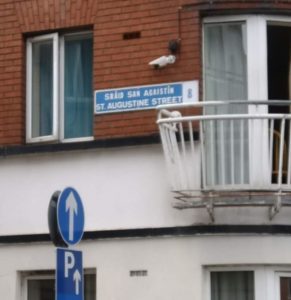 The first thing I did was go into the nearest snack bar and fix the hunger and, with it, some of the confusion. I also needed the toilet rather badly, but that was up a flight of steep stairs and I didn’t want to either lug the suitcase up (and down!) or leave it behind, so I walked the almost-a-mile to the apartment building where friendly reception people let me use the staff facility and gave me a token for the luggage locker.

On to Worldcon! I found the tram easily and achieved a weekly ticket — later I heard there were much cheaper tickets to be had, with the same functionality, but 12 euros on the scale of Worldcon expense is hardly the end of the world. (I bought two pairs of earrings each costing 5/4 of that.)

Then it was a bit hard to find the actual entrance, I saw several people with badges and felt very much like I didn’t belong, but eventually asked one of them where to go for registration, which was all the way around the building. And the other tram stop, which I’d already passed, turned out to be marginally closer and less cluttered with bits of building site, so that was what I used the rest of the time.

Even when I got the badge, with an uncomfortable bit of “do you want my legal name or my badge name” (“either will do”, and the correct name was on the badge, whew) I still didn’t feel like I belonged. I wandered a bit through the dealers’ room and into the main hall, until I saw Heather Rose Jones talking to some people. She did for me what I inadvertently did for her in Helsinki: give me a feeling of “at least there’s someone I know here”.

Then, of course, I kept meeting people I knew and people who knew me and everything was all right.

I had to miss “Liking problematic things” and “Writing villains in YA literature who defy expectation” (which would have clashed anyway), and then “Throwing Grandma out the airlock”, Aliette de Bodard’s reading, and “Science, religion and the art of storytelling” (but got a more
interesting/relevant religion panel later, I think). And I’m very glad I was too craven to sign up for Diane Duane’s writing workshop because I’d have missed that too. It did mean that I missed Diane Duane completely by never being anywhere that she was.

(In panel notes: actual notes and quotes are bold, the rest is my post-hoc subtext)

(I’m not a weaver, but I play one in roleplaying games occasionally.)

With the wonderful Jeannette Ng (I really need to find someone who has already read Under the Pendulum Sun and knows me well enough to tell me if it’s not too dark for me) and the equally wonderful Katrin Kania (“Can I have a human remote control please?”).

“When you spin bad yarn and sell it to a weaver, you’ll have sold it three times: the first, the last and the only time”.

Spinning with a distaff produces about 60 meters an hour. I learned to spin with a drop spindle in my teens, and later with a spinning wheel (which wasn’t invented until the 16th century!)

Most modern silks are far too too soft: medieval silk would be more like linen.

The idea that the Middle Ages = everybody wore drab and dreary clothes is SO wrong (so why do so many people still think that?) We got samples of wool dyed with vegetable dyes in wonderful colours, reds, blues, greens, yellows.

When woad-dyed fabric comes out of the vat it’s yellow-green, it dries blue by oxidation. The pictures to go with that were spectacular. Also dyeing with woad is so complex that it’s a whole trade of its own: there are ten places in the Netherlands that have a street called after it.

Tablet weaving = for ribbons and bands. That actually looks like something I could take up.

Crochet, like spinning wheels, is a 16th-century thing, but the Romans already knitted. Socks! Not much knitted fabric survived, but then not much fabric survived at all because it’s all organic material and it tends to be destroyed completely by time and environment. Finding a bit of fabric the size of a stamp is as exciting for the textile archeologist (that’s what Katrin is) as finding a gold ring is for a non-textile archeologist.

Then the curse of Worldcon hit: panels are always too short.

(didn’t remember actually going there until I saw the notes I took: must have eaten very late)

Simon R. Green frankly is an obnoxious person who talks over the women on the strength of his having cranked out more than 60 books. (Jane, of Dumpy Little Unicorn, noticed that too.) Reminds me a lot of Maree Mallory’s foster father in Deep Secret. He actually bragged about having written more books than an acquaintance of his because he plots and outlines everything in advance and the acquaintance is a pantser. I wish he’d named the acquaintance so I could seek out that person’s books!

SRG: The barbarians didn’t bring down the empire, they inherited it.

Emma Newman: it’s like a stone in my shoe when I’m reading [something] when it doesn’t all fit together.

SRG: I’ve suffered for my art and now it’s your turn. (I think that was in the context of leaving lots of infodump in a published book, not SRG’s actual opinion)

EN: what’s the point of having a fantastic world if there aren’t any characters you care about?

SRG started another diatribe about plotting everything, but then he allows for “happy accidents” like 200 pages of veering off on a tangent in the middle of book 3 of a series. People tell him that’s the best book in the series. Care to guess why?

Gah, Chekhov’s gun comes out of the woodwork.

Finally I could get to the apartment and meet everybody — already met two of them in Holyhead, of course, and I knew Roommate from Helsinki — and most of all I wanted a shower and to get out of my travelling clothes, so to St. Augustine Street I went. And then to the pub, where there was decent pub food and a singer with a splendid voice and quite good presentation and we all enjoyed ourselves immensely. I wonder if there are any pubs in Dublin that don’t have live music!