So I thought I’d solved my Firefox language problems, but then I clicked on the empty-tab page. And that was still in Dutch. 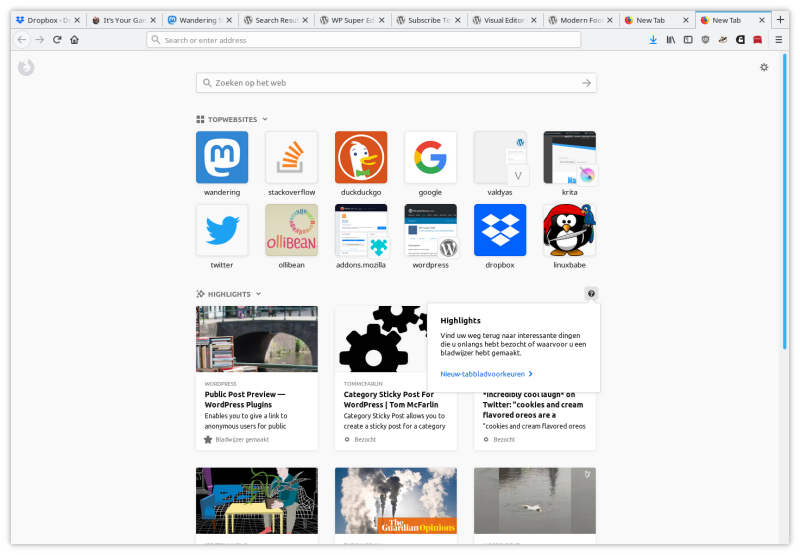 I did some more wailing on Mastodon, which duly crossed the bridge to Twitter, where a helpful soul on the Firefox support team picked it up.

Hey, you can download Firefox in your language here: https://t.co/4ILUbIhPjU

That looked very much like the support person misunderstanding me completely, but fortunately I refrained from saying “please read before you mansplain” and said this instead:

Me: My language for Firefox is English. The problem isn’t that I don’t know how to make it use Dutch, but I didn’t know how to STOP it using Dutch. Removing the locale with apt-purge solved that, except mysteriously for the New Tab tab.

Me: That will also destroy my plugin settings, right? I’d rather not do that if I can help it. (Anyway, now I have the menus in English, which is what I wanted.)

MkII: Everything will be backed up in a folder on the desktop called ‘Old Firefox Data’

(So that was what the mysterious Old Firefox Data folder was that I found on the old laptop! I must have done a refresh and forgotten about it completely because I never used the Desktop folder.)

Me: But will that make the New Tab tab forget Dutch, too? (That’s LITERALLY the only thing I want, so if it doesn’t do that I don’t want the hassle)

MkII: It will reset all settings and preferences to default, so yeah it should.

Me: But the default (= what it did before I changed anything at all on the new install on the new computer) was to use Dutch, and that’s what I don’t want! (I do want en-BR, and it would remove that too)

(yes, I typed en-BR, which should of course have been en-GB; thanks, @bellinghman)

MkII: Do you have anything in about:addons?

Yes, I do, in fact: various blockers and the wonderful thing that replaces photos of obnoxious public figures with kittens. There’s no twitter record of me telling that to MkII so perhaps I didn’t, or else twitter lost it (both are equally likely). None of those are likely to do anything to change language preferences, but checking it does make me notice another thing:

Me: And on the extensions page, Privacy Badger and uBlock Origin talk to me in Dutch and the other stuff in English. Curiouser and curiouser.

MkII: What is your locale set to?

Me: I removed any reference to “nl” locale from about.config (which didn’t help at all), then purged the locale files (which did, partially).

I think I also sent MkII  the screenshot of the “after” state (last in yesterday’s post) but that doesn’t seem to have left a trace either.

Then it occurred to me that I might as well try to set all my system locale to en-GB to see what would happen. Scrolling through the list looking for B-for-Britain, and then G-for-Great, found en-BE and en-FI settings, obviously for Belgians and Finns who want their computer in English! That meant there was likely to be en-NL as well, and indeed there was. (Also exciting things like Irish — but not Welsh — and West Frisian. If I was a native speaker of an actual minority language I might even want to have my system in that, but somehow Dutch on a computer always looks to me like it’s been dumbed down.)

I set everything to en-NL. And that solved all my problems.

I did remember to thank MkII, after I’d already told them not to spend more time on it unless they were intrigued, because it was a mystery rather than an annoyance now:

All problems solved by setting en-NL locale. It was my system after all! Thanks for helping me think.

Firefox’ locale information has gone even weirder, though: 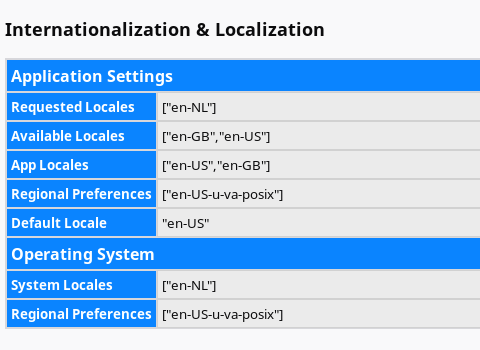