The roleplaying campaign brought us to unmapped territory, and even the mapped territory was badly mapped, so I set about making a better map. After unsuccessfully trying to install Krita, and then (with Kubuntiac’s excellent script) successfully installing Krita, I loaded the existing map into Inkscape anyway because, confound it, I want my map to be scalable. I have a little map of Essle that I want to convert to vector and paste it where Essle is on the map, and the same for Valdis and Ildis and Veray, and all of Ryshas for that matter, in fact anything that I’ve ever drawn a sketch map of.

I knew from my early attempts with Gimp and later attempts with Krita that it’s possible to have a layer with the original of what you want to draw a copy of, and put a layer on top of that to paint on, so that’s what I did. Hampered by the fact that I knew that the original map was crap –Rizenay wasn’t nearly far enough north, and Turenay much too far east, and things like that. So I first made a list of latitudes (longitude wasn’t very relevant) to put places at and put them approximately at the right distance from each other. This screwed up the original map no end, but never mind, I could hide it. I was also hampered by the fact that I knew nothing whatsoever about vector graphics and was using all the wrong tools. Come to think of it, perhaps I’m still using the wrong tools: all websites I found about drawing maps with Inkscape want one to use the bezier tool, which doesn’t seem to do anything I need. I’m using the brush (dip pen with brush preset) and the line-drawing tool instead, with ellipses (realised as circles) for the villages and towns and cities, and the text tool for the names, and a gradient fill for the sea. I said to my other half “I’m probably using Inkscape for something it’s not designed for” but he said “you’re using it exactly for what it’s designed for, to make resolution-independent graphics.”

A couple of days went by in which I kept coming back to the incipient map between doing real-life stuff and getting more and more frustrated. Then I suddenly got the hang of things, something resembling a workflow, making me have to delete whole layers and doing the same thing a different way instead because that seemed to work better. I learnt a lot of useful things, for instance that if you group things that are on different layers, move them together, and ungroup them, they all end up on the same layer. When I sighed about that on identi.ca, Libre Graphics World replied on Twitter (it’s forwarded): “Well, yes. Internally layers are actually groups in Inkscape. You can’t have an object in a group that belongs to another group.” This was before I learnt, by serendipity, that it’s possible to move an object to another layer simply with Shift-PgUp (or PgDn as the case may be) so I duplicated the layer and deleted the places from one and the place-names from the other because I wanted a separate text layer. In fact I have two text layers now: one with names of countries and regions that lies at the bottom so rivers can flow across the letters, and one with place-names and names of rivers so they can sit on top of the landscape. Also, I use the move-to-another-layer functionality a lot to put things where they belong when I’ve accidentally painted them on the wrong layer.

Then I distorted all of Valdyas with the “tweak by sculpting” tool because I wanted Turenay to be somewhat south of Valdis rather than considerably north– perhaps it needs to be further south still, but I don’t want to go there yet, Ryshas is still a mess anyway. For one thing, Turenay isn’t that far north of Veray. Nor, come to think of it, Ildis that far west of Valdis. This made me have to redo the place-names yet again because the words themselves got distorted –that’s how I learnt that a text object is in fact a group of number-of-letters objects– so I took  advantage of that to have a consistent font size for cities, largish and smallish towns and large, small and tiny villages, and to make river-names blue (and learnt to rotate them at an angle), and to have country and region names in grey and on the bottom layer. And I drew roads, also about four times, and put a green star on the map on a layer of its very own to mark the point where the campaign has arrived. 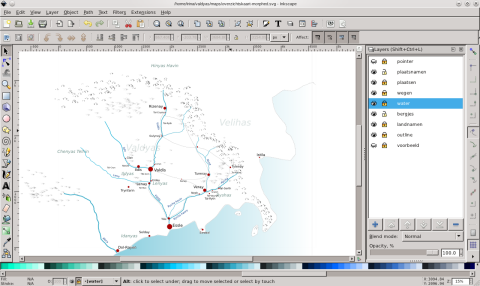 Next: make the size of cities and towns and villages themselves sort of consistent. I’ll probably draw the actual shape of at least the most important places rather than the brick-red circles I have now, but that’s for later. Also, there need to be two rivers and a lake and a mountain range in Velihas. Talking of mountains, I got some different mountain and hill clipart from openclipart.org and was blithely spraying mountains all over the map when I realised that the size the pictures were, the mountains must all be at least fifty miles across: this made me experiment with the spray tool and different zoom ratios. I think there are still better mountains in my future, but they have their own layer so that’s no problem.

One day, all this skill is going to come in handy. And I needed something to stretch me, something hard I can get better at (I love those “oh! I can do this!” moments) because I was heading for a nasty case of can’t-do-anything.