I thought I’d changed all the system settings: set the system language to en-GB and the fallback language to en-US, kept all the locale settings Netherlands (after all I want the right timezone, money format, etcetera) except Time-and-Date. But Firefox was partly in Dutch. I tried to find a language setting in Preferences but all that does is serve web pages in your preferred language if several versions exist.

Then Kubuntu asked me if I wanted to install some additional language settings. Well, why not?

That caused Firefox to be completely in Dutch.

Now I’m absolutely bilingual, so much that I sometimes don’t even notice what language I’m reading something in, but an application interface is something else: if it’s a different term I have to do an extra translation step, or even guess what it means. It doesn’t help that Firefox’ Dutch translation is clunky, awkward Dutch — or perhaps that’s just a general characteristic of Dutch interface language.

I searched. And got several answers to “how do I get Firefox to serve me webpages in my language?” and “how do I cause Firefox to not be in English”?

I got into about:config, disregarding its dire warning which somehow sounded more ominous in Dutch, and set general.useragent.locale to en-GB. No change. Reboot, in case it would need that to take. No change.

Trying to find something –anything!– that would help I stumbled on Troubleshooting, or rather Problemen oplossen, in the Tools menu (don’t remember what that was called in Dutch) and found this: 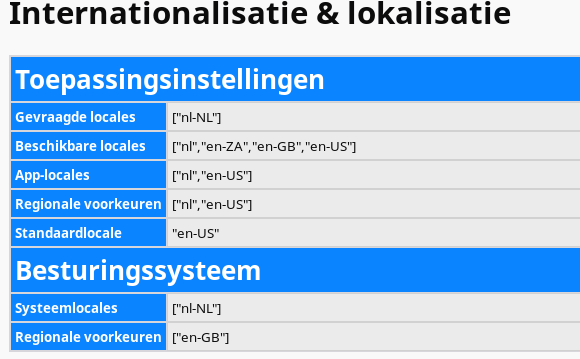 Ah, right, that would do it. But I had no way to change any of them (except Standaardlocale, which is likely the already changed general.useragent.locale). This being in Dutch made it hard to search too, but a kind Canadian soul on Mastodon sent me their version: 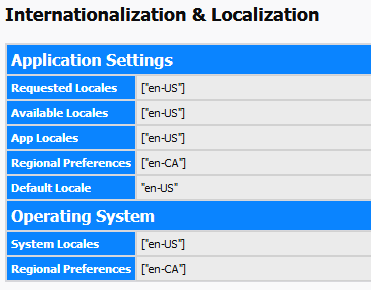 Now I can search. People on stackexchange acknowledge that the problem exists and say it’s a bug. But someone has a solution that can’t fail to work:

Which would be going a bit too far, because it would purge en-GB too! So:

Tada! Firefox is in English again. And if I would ever want it in Dutch I could just apt-get install the locale back now I know what it’s called.

Check in the troubleshooting menu: 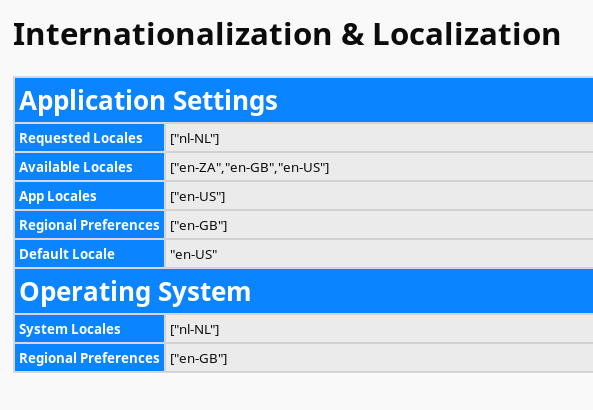