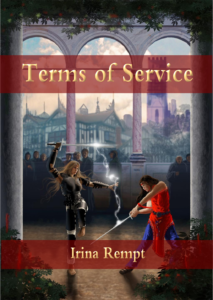 Then ebooks emerged and (possibly because of that) self-publishing suddenly became respectable, which was a great incentive to FINISH IT. Found a splendid artist (Andreas Raninger) to paint the cover, did all the little things to it that always take up so much time, then I got stalled. Because I was scared. I could already hear everybody telling me that it’s a cop-out to self-publish and that I ought to be brave and keep trying the agents.

Nope. I spent years not writing because I was disheartened. I know that people exist who love to read what I write. Who am I to withhold it from them because I feel I ought to conform to other people’s standards? I don’t think I’m the bee’s knees (do they have any?) but I do know that Terms of Service is a book. And that it’s good enough for what I want it to be.

When I was sitting there being scared, my other half suddenly decided to go to FOSDEM and proposed to make a city trip out of it, and that gave me the final push. I said “what if I have bookmarks made and hand them out at FOSDEM?” So I did:

In fact it didn’t get printed exactly like this; the print shop moved their cutting window a few millimeters to the left so the right edge of the bookmark was flush with the red bar. I was slightly pissed off, after all I hadn’t intended it like that, and why had they decided that it was better their way? I took it as a learning experience, “next time tell them, and show them, exactly what I want!” but then I looked at the pdf file I’d given them and noticed that the pdf conversion had made my cutting marks so much thicker that they could have thought that I wanted the red bar at the edge. Ah well. It’s very pretty, and it looks like a real professional thing, not a home-made thing.

My beta reader wanted to know whether I was planning to get a separate domain for my books –they live in a section of my homepage now– and I hadn’tthought of that before, but it’s a very good idea. I do need some money, because even if websites grew on trees one would have to pay the growers and I spent most of my discretionary money on the bookmarks. But there’s a donate button, and I hope people will donate.

I could of course have put it on Smashwords or some such venue and asked $ (or €) 2,99 or something for it, but I don’t want it under anyone else’s control than mine. If a publisher notices it and wants to negotiate, okay, but I’m not giving it out of my hands in its present form.

Anyway, here it is. Enjoy!